A dog will slobber when it’s hot and panting. Dogs sweat, and panting is the primary method used to cool off. This process sometimes results in your dog struggling to control its saliva production. But if your dog is drooling a lot suddenly, there could be a medical explanation.

Why is my dog drooling so much suddenly? It’s natural for dogs to salivate in response to stimulation, but an overproduction of saliva could be the sign of a health problem. Salivary problems in dogs can be caused by anxiety, travel sickness, a blocked/sore throat, oral hygiene, teething, heatstroke, and irritation of the mouth.

Salivation in dogs isn’t a reason for concern on its own as certain dogs, or dog breeds, drool more than others. But a sudden, noticeable increase in saliva production could be a warning sign. We will explain why dog’s drool, and whether your pet needs attention from a veterinarian.

Why Do Dog’s Drool?

Dogs naturally create saliva in their mouths as it plays a critical role in breaking down their food.

Perhaps your pet’s mouth is watering at the idea of the dinner that’s coming their way, and this drool is getting trapped in the dog’s mouth. This is then released in large quantities. Typically, a dog can keep this production of saliva under control.

Just how much drool a dog produces depends on the breed. At times, all dogs will produce excess saliva due to external stimuli. Of course, there may be a medical reason for the amount of saliva.

Dog Breeds That Drool the Most

Some dog breeds are more prone to drooling than others. Dog breeds that drool a lot include:

Dogs with flatter faces tend to drool more, primarily because the faces of these breeds contain skin flaps that trap saliva. One shake of the face later, and that drool is flying all over the place.

This is less of a problem for a dog that looks more wolf-like is shape, with a long face or snout. If your Labrador, Alsatian or similar breed is drooling excessively, it may need investigation. 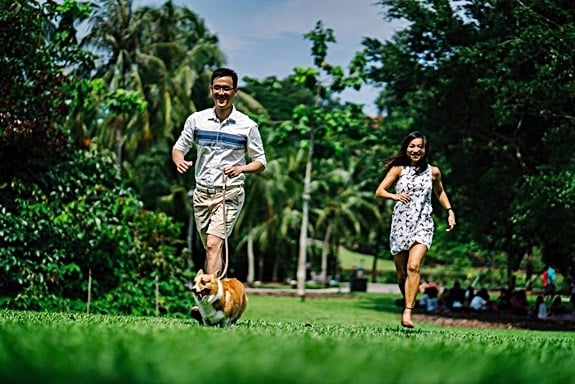 Why is My Dog Slobbering So Much?

If your dog is drooling more than usual or appears to be slobbering more than they ever have before all of a sudden, there may be a medical or psychological explanation. Some of the possible reasons for doggy drooling include the following:

If your dog’s body temperature is very high, they may come down with heat stroke. Also known as heat exhaustion or hyperthermia, one of the symptoms is a substantial amount of drooling.

Irritation of the Mouth

A dog will start to slobber if their mouth has been irritated. A dog chewing on something they shouldn’t, such as a stinging nettle, electrical cable or tin foil could be the explanation.

This could be gum disease or toothache. Dogs tend not to be shy about letting us know if they’re in pain, so be vigilant about understanding the symptoms (most notably refusing to eat).

A teething puppy will drool a lot more than an adult canine equivalent. There is every chance they will get their watery mouth under control by the time they reach adulthood.

Your dog may be expelling a considerable amount of saliva because they are reluctant to swallow anything they are producing due to discomfort.

This may be something comparatively mild that can be treated by antibiotics (unless it’s a result of kennel cough, in which case it will just have to run its course).

Maybe your pet swallowed something that got stuck in their windpipe, or it could be down to a medical condition called megaesophagus. This can prevent your dog from breathing.

You may find that your dog slobbers more while riding in the back seat of a car, or just before their ears popping when taking off on a flight.

Sometimes a dog may drool a little more when they’re feeling unsettled or nervous. If you find that your dog tends to slobber up a storm while they’re in the waiting room of the vet or when they meet a new person for the first time, their nerves could be the explanation. 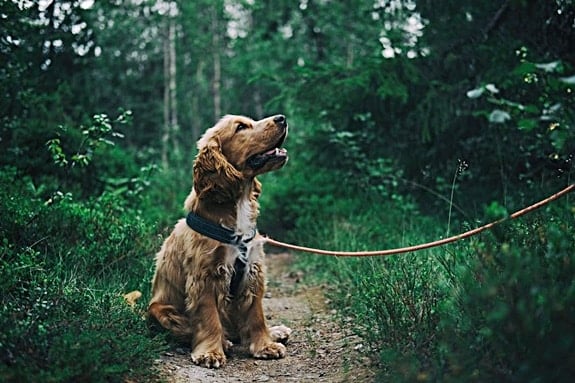 Of course, dogs will produce drool. So, unless it’s sudden and to excess, try not to worry too much. Just a general mouthwatering isn’t always a sign of a medical issue.

Why is My Dog Drooling on One Side of its Mouth?

If your dog appears to be continually drooling from just one side of his/her mouth, there could be many possible explanations.

Why is My Dog Drooling Around the New Puppy?

If you have introduced a new puppy to your home and your existing dog is drooling in their presence, it means that they are feeling anxious and worried.

They are stressed by the fact that they’re suddenly sharing their space, and this drool is a result. This drool may be the warning sign of a panic attack, so separate the dogs.

Following the slow and steady integration of the two canines will resolve the issue, and your older dog will soon return to normal. If not, seek assistance from a vet or animal behaviorist.

My Dog is Drooling and Licking Excessively

This is most likely a sign that your dog is in pain in some way. It’s most likely the result of dental trauma that is giving them a sore mouth.

As we cover in our guide to why a dog licks everything in sight, they are trying to soothe themselves in some way. The slobbering and drooling in advance of this may be because they have an oral issue.

There is also a chance that your dog is nervous and apprehensive, especially if they are licking the thin air. Take a look at your dog’s tail in such a situation and learn what position it means.

A dog’s tail between its legs doesn’t always mean it’s sick – your dog may just be trying to tell you that they are frightened, and would appreciate being removed from a situation. 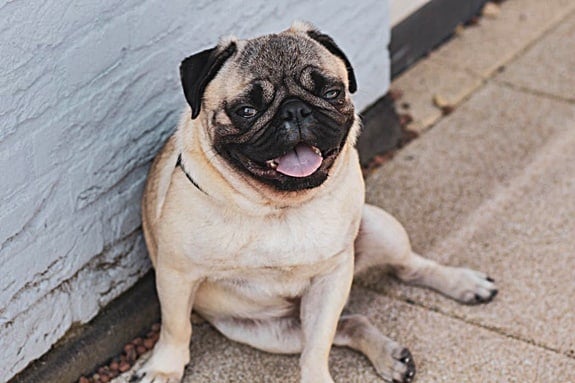 My Dog is Drooling and Vomiting

Vomit is never a good sign with a dog, and accompanying the sickness with slobber doesn’t make it any better. Drool quite often precedes an unwelcome emptying of the stomach.

If your dog is producing a large amount of drool and throwing up, it more than likely means that they have placed something in their mouths that are irritating them in some way. This could be an allergy or something toxic.

Plants are the most likely culprits in this instance. So, if you’re also wondering why your dog is eating grass all of a sudden, you may be able to track down the answer to their oral irritation.

You may also find that your dog is retching a kind of white foam that closely resembles the drool and slobber that appears at the corners of their mouth.

This is usually because their stomachs are empty, and they are unsuccessfully attempting to purge something that is irritating them.

My Dog is Drooling and Shaking

A dog doesn’t tend to shiver or shake unless there is something very wrong, or they are petrified. Either way, it’s not something that you’re going to want to ignore.

Remove your dog from a situation and offer reassurance if you suspect they are having an anxiety attack, and get them to a vet if you can’t explain why they are having such a reaction.

Shivering and shaking is usually a symptom of a significant organ problem within your canine’s body. This can affect the kidneys, heart, or be the initial signs of a seizure.

My Dog is Drooling While Sleeping

Canines are prone to leaking drool from the corner of their mouths while snoozing.

That’s because they are not consciously swallowing the saliva that their mouths continue to produce regardless of whether they’re awake or asleep. They may also take up an unfamiliar position such as laying upon our backs.

On top of this, the muscles are all relaxed, and they’re not consciously preventing drool and slobber from creeping out of the corners of their mouths.

Unless your pet is drooling to an excessive point that wakes them up or leaves them at risk of choking, let sleeping dogs lie. You’ll have to do a little mopping up afterward, that’s all.

Can a Dog Ear Infection Cause Drooling?

Drooling and slobbering are closely linked to a dog’s ear health. If your dog’s ear smells and has brown discharge, it’s vital that this is dealt with by a vet.

It’s not just ear infections, either. Problems with the eyes and throat can also lead to an excess of drool in your canine. A course of antibiotics will typically resolve these ailments.

My Dog Can’t Walk Straight and is Drooling

This could suggest that your dog is having a stroke or other serious health concern. Other possible reasons for this behavior include the following:

All the symptoms of vestibular disease are similar to that of a stroke, but thankfully, it’s usually something less severe, such as an inner ear infection.

If your dog has been swimming or playing with a hose all day, there is a slim chance that they have consumed more water than its body can handle.

This could lead to their lungs becoming flooded, and they’ll drool to excess and stagger around as though drunk. Get medical help ASAP if you suspect that your dog has water intoxication.

Another serious health condition that tends to feature these symptoms is gastric torsion, which will need to be investigated by a vet urgently as it can quickly become fatal.

You will learn more in our guide to what you can give your dog for gas and bloating. 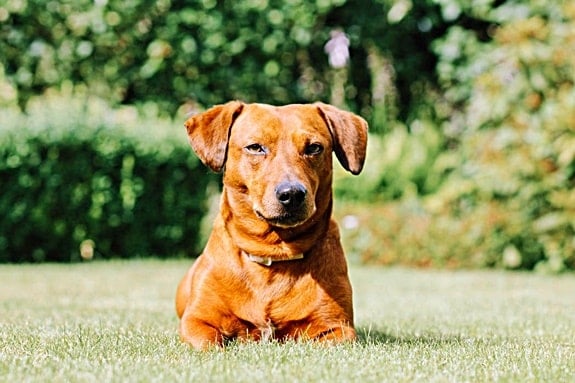 Although we’ve been at pains throughout this guide to point out that drooling isn’t usually a concern, it can be worrying if accompanied by a loss of mobility and coordination.

How to Stop My Dog Drooling in the Car

Drooling and slobbering in the car is a common problem, primarily because it’s such a common side effect of travel sickness in pets. This is because a dog’s sensitive ears will vibrate and react to the movement of the car, and this could leave them feeling vulnerable.

If your dog doesn’t enjoy car travel because it makes them nervous, they are even more likely to drool and slobber as their anxiety gets the better of them.

Different medications can reduce the chances of this drooling, as will opening a few windows to take your dog’s mind off the fact that they’re being transported in a steel box.

Drooling is a fact of life for most dogs, especially if you have a flat-faced breed. If your dog is starting to drool uncharacteristically, cross-check all the possible reasons and get them checked out.