Dogs are generally expressive little critters. They may not be fluent in English (at least that’s what they want us to think…), and it’s as yet unproven as to whether they bark in regional accents, but canines communicate through a variety of methods.

Of course, dogs use their voice boxes without hesitation. Many dogs bark, squeak, whine or cry to express their excitement or displeasure. Body language is arguably more important to chatty hounds though, which is why it pays to understand dog tail positions and what they mean.

You can gain a little insight into what it means when your dog tucks their tail between their legs or indeed displays it proudly and prominently. So, keep reading for some interesting facts!

How much do you actually know about dogs and their tails? The more you understand, the better you will be able to comprehend what your furry friend is trying to tell you!

Why Do Dogs Put Their Tail Between Their Legs?

Now that we have established that dog tails display all kinds of signals, it’s time to look deeper into one of the most important signs of all – a dog tucking their tail between their legs.

Many people suspect that when a dog tucks their tail between their legs, it’s a sign that their canine companion is in pain, sick or deeply afraid of something. There is often truth in this, but as always, the reality is a little more complicated.

My Dog’s Tail is Between Their Legs, and They’re Shaking

This is a classic sign of fear or anxiety. Remember how we discussed that a pack alpha would raise their tail high, allowing their pheromones to spread far and wide? Well, a dog further down the pecking order that doesn’t want to be acknowledged will behave oppositely. 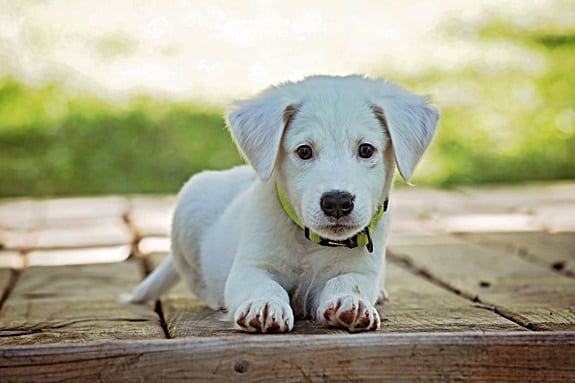 My Dog’s Tail is Between Their Legs, and They’re Panting

This is the most likely warning sign that your dog is feeling sick or unwell. Dogs that pant suddenly and without reason – i.e., not immediately following exercise or on an exceptionally hot day – are usually experiencing some kind of discomfort.

It’s possible that they’re struggling for breath, or that they are experiencing a strange sensation elsewhere in their body. This will understandably frighten Fido, leading to the tail drooping between the legs. If any other warning signs of illness accompany this posture, such as uncharacteristic lethargy or vomiting, make an appointment with a vet ASAP.

My Dog’s Tail is Between Their Legs, and They’re Whimpering or Crying

We’ve just discussed how the tail between the legs is a classic sign of anxiety. Dogs also use whimpering or crying sounds to verbalize fear, such as the worry that inflicts our furry friends when a firework display is taking place, or they are concerned by the presence of another canine. This means that combining the two behaviors is a classic sign of anxiety in your dog.

If your dog is whimpering with their tail between their legs, they are seeking reassurance from the rest of their pack. That means you. If you notice your dog exhibiting this behavior, you should scoot over and give them a reassuring stroke – and a cuddle if they enjoy such contact. If you can do so, you should also remove them from the area that is causing such concern. After a while, you should notice that the tail springs back into life eventually.

My Dog is Walking With Their Tail between Their Legs

If a dog keeps their tail between their legs even while they’re walking, they are trying to send a message. Usually, it means that the dog is worried or frightened by something, and is not feeling confident in their surroundings.

If you notice your dog walking this way, try to encourage them to hurry up a little and get them somewhere else. Hopefully, this will mean that your dog will perk up when the perceived threat has passed. If the behavior continues, your dog may be sick, and you should seek professional advice.

If your dog is eating with their tail between their legs, don’t worry – it’s not a sign that they dislike the meal that you prepared for them. It’s a compliment.

This is the one time that your dog tucking their tail between his or her legs is not a sign of distress, worry or anxiety. Dogs often adopt this position while they are concentrating on filling their faces, or during other activities that they enjoy such as digging a hole in the ground.

Nobody is quite sure why this is, but it appears to be a sign that your dog is concentrating on the task at hand – especially if his or her ears are also pointed forward. 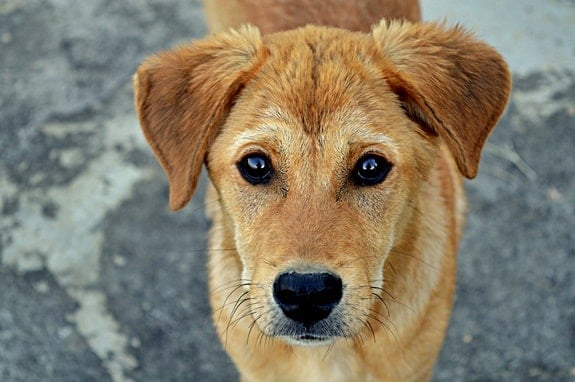 My Dog is of Senior Age, and Their Tail is Always Down

Sadly, it’s a cruel and unfair fact of life that dogs age faster than humans and have a shorter life expectancy, If your dog is older than ten in human years, they are considered senior – and as we all know, as we grow older our bodies start to give us more trouble.

A senior dog that constantly has their tail between their legs may not be a problem. It’s possible that they’re just masking their scent as they are not interested in socializing with other dogs in the street (especially those pesky and boisterous puppies!), and can’t be bothered to tell these other canines to leave them alone.

On the other hand, however, it could be a sign that your dog is experiencing health problems. These could be failings in the nerve endings, arthritis or a variety of other concerns. PetMD has a list of possible tail problems that could be impacting your dog, so consider speaking with a vet if you have any worries.

There are plenty of other ways that dogs send out messages using the position of their tails – both to humans and their fellow canines. Forget the myth that any kind of tail wagging from a canine is a sign of happiness, as your dog may be using their tail to send a warning message.

The important thing to know is that a dog’s tail acts in almost complete reversal to their brain. What we mean by this is that a dog is experiencing a flood of messages from the left-hand side of the brain, which is associated with pleasure and fun, will wag their tail to the right. If a dog is having a right-brained moment, however, they will be filled with anxiety, frustration or anger and will wag their tails to the left to signify this.

Allow us to elaborate…

My Dog is Wagging Their Tail to the Right

A prominent wagging tail to the right is a dog’s way of saying hello, and that they are excited to see somebody or something. When out for a walk, many younger dogs that recognize a familiar pooch do what is referred to as a ‘play bow’ –bending down until their tummies are on the ground – to signify an interest in playing.

Many dogs outgrow this particular behavior as they leave the puppy years behind, but they replace the social cue with wagging their tail to the right. This is sending another message to other dogs that says, “I’m in a great mood! Feel free to come on over and say hello – if I may say so myself, my bottom is smelling particularly intoxicating today.”

Although this message is primarily for the benefit of other dogs, this is also a hugely beneficial piece of body language for any dog owner to learn. It helps us judge whether we should allow our pooch to approach a strange canine in the park, and gives us an early warning that our dogs may be feeling playful and need a little off-leash time.

My Dog is Wagging Their Tail to the Left

Of course, every action has an opposite reaction – and a dog wagging their tail to the left is sending a very clear and unmistakable message that they are not in the mood for any socializing.

This could be a permanent status – some dogs just don’t like other dogs, for their own reasons. It may be that the canine in question is grumpy that day because they are hungry, thirsty, tired or in pain. It may be that the dog had a bad experience with a pooch of the same breed, and wants nothing to do with this new arrival.

Whatever the reason, respect the left-side tail wag and the fact that it is basically saying, “not today, I’m not in the mood. You’ll leave me alone if you know what’s good for you.”

If a dog approaches a hound that has sent this warning sign, a display of dominance and/or aggression is almost certain to follow. Learning this particular piece of canine body language yourself could spare your pup from any unpleasant interactions with an antisocial animal, and ensure that everybody can enjoy their walk without an incident.

Here are some other tail positions to keep an eye out for, and take the appropriate action wherever necessary.

My Dog is Frantically Wagging Their Tail

Broad tail wagging is usually a good sign. If a dog is allowing their tail to swish from one direction to the next, unburdened by any sense of caution, it’ll be because they’re in a great mood and don’t care who knows it; this is doggy body language for, “I am approachable, and I am not a threat in any way.”

You may be familiar with this kind of tail wagging when you return home from work, and your dog greets you, or when you lay down their dinner for the evening. If a strange canine or human receives this greeting, it means your dog has taken an immediate shine to them and wants to make this person or dog feel welcome in their company.

My Dog is Very Gently Wagging His or Her Tail

If your dog is wagging their tail a little more slowly and cautiously, perhaps at a form of half-mast rather than fully extended, they have not quite decided how they feel about a person, dog or situation. This not a sign of aggression or distaste by any means – it just means that your dog is erring a little on the side of caution, and is prepared to turn and run if necessary.

Basically, this is your dog saying, “OK pal, the ball’s in your court now – should I be excited or anxious about the fact that you’re here?” If you ever encounter a dog that reacts this way, speak in a high voice to reassure them, and don’t make any sudden moves that could cause them to be skittish. You’ll be besties in no time at all. 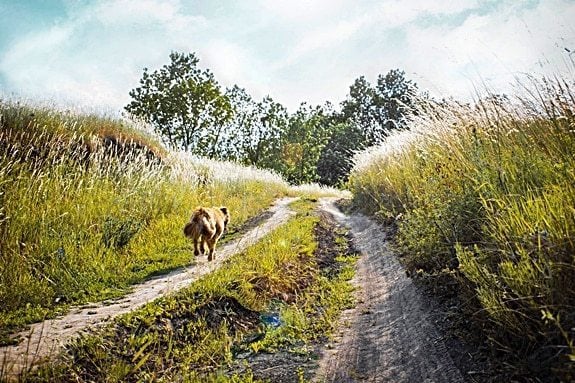 My Dog’s Tail Appears to be Twitching

If your dog is twitching their tail, almost frantically, this could be a warning sign. It certainly means that this canine is not entirely at ease, and if their tale is pointing straight upward while it twitches, a dog may be sending a message that you are on their territory. Remember what we said earlier about alpha behavior? This is a classic example.

Of course, if the same dog is behaving the same way but with their tail pointed downward – or between their legs – it’s a sign that they’re feeling intimidated or frightened, and question your intentions. If faced with this kind of reaction from a furry friend, reassure them that you have no intention of hurting them as quickly as you can.