Dogs take in their surroundings with their tongues just as much as their eyes and ears, meaning that they’re prone to licking anything in sight. Whether it’s your face, the furniture that surrounds them or even thin air, dogs love to lick.

Does this behavior ever stop becoming part of the canine experience, and start to become a cause for concern? The answer, like all matters pertaining to our pooch pals, is a matter of moderation.

If your dog is seemingly determined to lick everything that they come into contact with, causing inconvenience and potential health concerns, it pays to understand why. This guide will explain why your dog insists on licking everything, and what you can do to coach them out of this conduct.

My Dog is Licking Everything and Throwing Up

This is usually a sign that your dog is experiencing gastrointestinal distress, and should always result in a trip to the vet. Dogs lick in order to soothe their stomachs and ease any kind of discomfort they may be experiencing. Coupled with a tendency to purge the contents of their digestive tract, this all suggests that your dog has eaten something that disagrees with them and needs to have it seen to.

Why is My Dog Constantly Licking Me?

There are many reasons why dogs lick their human owners, and each and every one is complimentary.

Just some of the explanations for this behavior include: 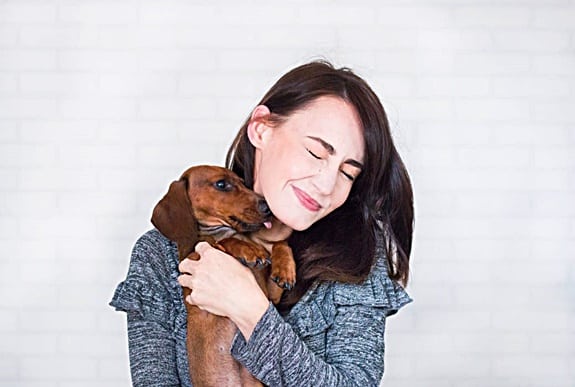 A dog licking a human is never a precursor to violence or aggression, so it’s not something that needs to be deterred on these grounds. Many vets would recommend not allowing your dog to lick your face, however, due to the possible presence of bacteria within your dog’s mouth and teeth.

Do I Need to Shower After My Dog Licks Me?

This depends on your personal preferences and tolerance for dog saliva! As we mentioned above, dog saliva tends not to contain anything untoward but their teeth and gums might.

If you are going to allow your dog to lick your face, you should certainly ensure that you know how to brush a dog’s teeth and be vigilant in knowing what to do if your dog has bad breath suddenly. This is a warning sign that something untoward may be growing in your dog’s mouth, and as much as sharing is caring, you are better off not receiving any such infection yourself.

Should I Train My Dog Not to Lick Strangers?

This is probably highly advisable. You may consider your dog licking your face to be the most adorable and hilarious thing under the sun, but somebody else may disagree. In fact, even though it’s nothing of the kind, somebody that doesn’t understand canine cues and behaviors may consider this to be aggressive.

If you’re wondering how to stop your dog from licking the face of a stranger, follow the same training steps as those laid out in our guide to how to stop a dog from jumping and nipping when excited. The fundamentals are the same, and it’s a fairly simple process that won’t harm your relationship with your dog.

Why is My Dog Constantly Licking Paws?

If your dog is constantly licking himself or herself, they may be in some kind of pain and are seeking comfort. Licking is a dog’s way of self-soothing, so if your pooch appears fascinated by their paws, take a look at the appendages in question. You may find that there is a stone or splinter trapped between the pads of Fido’s paws, leading to a desire to ease discomfort.

If you don’t see any signs of a foreign object trapped in your dog’s paws, the problem may be psychological. It’s possible that your dog is suffering from some kind of anxiety, or they are bored and don’t feel that they are receiving enough physical or mental stimulation. Alternatively, Fido may be fighting parasite infestation such as fleas or ticks or could be struggling with dry skin.

If you’re still wondering why your dog is licking or chewing on their feet, check out our detailed guide to this behavior.

Why is My Dog Constantly Licking Lips?

Sometimes a dog licks their lips because they’re used to receiving attention when they do so. Outside of this, however, lip licking in dogs usually comes down to one of three reasons. 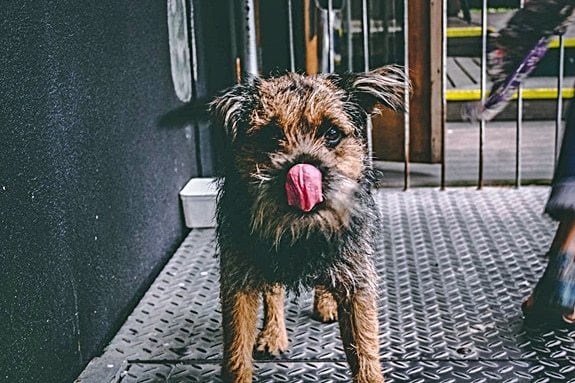 The latter is simple enough to explain. If you have a bag of treasured treats in your grocery shopping and your dog is licking their lips while sniffing the bag, or your are dishing your pet’s dinner into their bowl in anticipation of carrying it to their feeding mat, your dog may lick their lips in anticipation (see also ‘The 10 Best Dog Treat Bags For Practicality And Style‘). This is simply a matter of your hound preparing himself or herself for the feast to come, and it may even be accompanied by drooling!

When a dog licks their lips outside of a food-related scenario, however, they are more likely to be attempting to appease somebody or something that they are afraid of. A dog often licks their lips to display that they are submissive, and not a threat. Don’t mistake this submission for surrender though, as dogs will defend themselves if they feel vulnerable after sending this warning sign.

If it’s your own dog that licks their lips, maybe it’s because they are worried about an impending scolding, or they are reacting to being told off. Maybe they’re worried that you think they’re peeing on the bed on purpose!

If it’s a strange dog in the park or that you otherwise encounter on a walk, however, back off and give this canine some space, all the while ensuring that you understand that you mean them no harm. As we have said, licking lips can turn into a display of aggression if ignored – keep an eye out for any other warning signs that an attack may be coming.

A third reason why a dog may lick their lips constantly, seemingly with no rhyme or reason behind the behavior, could be a health concern.

Some of the potential sicknesses that inspire constant licking of the lips include:

Why is My Dog Constantly Licking Air?

It can be a strange sight, watching a dog seemingly licking thin air time and again. There are a handful of possible reasons for this:

If your dog is licking the air with regularity and you cannot pinpoint a simple solution using the examples above, it’s advisable to make an appointment with a vet. There could be some kind of underlying health reason that is compelling your dog to act this way and they need help.

Why is My Dog Constantly Licking Their Own Behind?

There’s often a simple enough for reason for this, and you’re going to have to forgive us for being crass. Next time you’re taking a walk around the park and your dog does his or her business, take a look around and look for the dispenser of toilet paper for your dog. 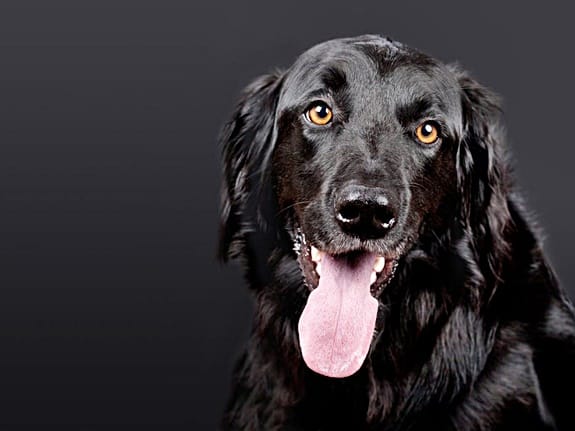 Not seeing anything? That’s because there’s no such thing. Throw in the fact that dogs often have furry around their bottom and you’re potentially dealing with a battle against Klingons that would have Captain Kirk cowering. Dogs want to be clean, and licking themselves as part of a bathing ritual is the quickest and easiest way that they know how.

Does My Dog Lick Their Own Butt Because They’re Sick?

Of course, there could be something a little more serious or sinister at work here. If your dog is licking their own backside for what seems like hours on end, including at strange or antisocial times such as the middle of the night when everybody is trying to sleep or halfway through a walk, they may be facing some kind of health problem – especially if they are scooting along the ground too.

Some of the health concerns related to a dog incessantly licking their bottom include:

Why Does My Dog Lick Their Own Pee and Poop?

A dog consuming his or her own waste is more common than you may realize – so much so that the behavior has an official name, Coprophagia. There are many reasons why your dog may be licking their pee or poop – and maybe even escalating the behavior into eating it.

Here are some of the explanations:

Why Does My Dog Lick the Carpet?

This is very common in many dogs, and it’s fairly easy to understand why. Dogs are considerably lower to the ground than most humans, and the carpet will be host to all kinds of scents. Spilled food, traces of other dogs that may have visited, the ghost of toilet accidents past… it’s a cornucopia of aromas that your pooch will be keen to explore further.

Of course, your dog may also be a little bored or anxious, which means they may be tucking into carpet fibers as a way of keeping themselves amused. This could be potentially dangerous, as they may be licking up and swallowing all kinds of foreign items – from rotting scraps of food to your child’s Lego bricks. 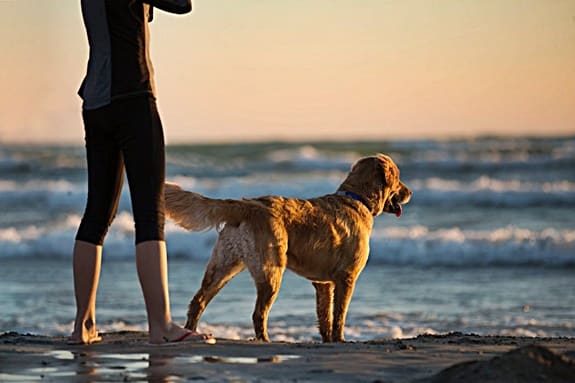 If you’re worried about your dog’s habit of licking the carpet, seek help from a vet – and look into cleaning your carpet. Use baking soda, white vinegar and citrus juice diluted with water for this, as these ingredients are impactful on stains without being harmful to your dog. Even better, they’ll create an unappealing smell that prevents your dog from wanting to continue licking the rug.

Is it Safe for My Dog to Lick My Dinner Plate Clean?

Not really – this isn’t a behavior that you should encourage. Ignoring the hygiene implications and the fact that you’re teaching your dog that it’s OK to take food directly from your plate, Fido may be consuming all kinds of unfortunate things.

While not necessarily toxic, spicy foods can cause your dog to bloat and suffer from gas, while the presence of hard-to-break-down foodstuffs may prove a struggle for your dog’s digestive tract.

Try to avoid allowing your dog to clean your plate with his or her tongue and save this task for the dishwasher. Everybody will feel a lot better for it in the longer term.

Why Does My Dog Lick Everything at Night?

If you find that your dog turns into a licking fiend after dark when the sun goes down, there could be many explanations.

The primary possible reason revolves around food. If you only feed your dog once per day, usually as an evening meal, they may start licking themselves because the food has left them feeling uncomfortable.

As an experiment, try breaking your dog’s daily food allowance down into two, smaller portions and see if they repeat the behavior after eating both times. If this is the case, your dog is probably struggling with an allergic reaction to their food – speak to a vet about potentially getting some tests run, and changing your dog’s diet. Alternatively, if you only feed them in the morning, your dog is looking for nourishment as they have grown hungry as the day has worn on.

If your dog insists on licking you at bedtime, this may be their equivalent of a goodnight kiss. Your dog feels very vulnerable when they are sleeping, and they will no doubt assume that you are feeling equally exposed. Licking your face while you are relaxing in bed if your dog’s attempt to calming both your nerves and their own, and ensuring that your pack bond is as strong as ever.

Finally, consider the fact that although dogs have superior night vision to humans, they may still find the darkness a little intimidating. If your dog cannot quite see what is going on, they may opt to lick their way through their surroundings instead. As always, speak to a vet if you have any real concerns about your dog’s behavior, but for the most part, a little more licking by night is normal.