When Johnny Depp and his (now former) wife Amber Heard flew to Australia so Johnny could film one of the 27 sequels to Pirates of the Caribbean, they brought their dogs (Pistol and Boo) with them in the cabin of their private jet and “forgot” to declare them, bypassing Australia’s strict quarantine laws.

They were caught, and to avoid prosecution, they were forced to film a rather weird apology video.

Your own plans to travel with your precious pooch aren’t likely to involve a private jet, so you need to be well-informed about what you need to do when it comes to flying with your dog in the aircraft’s cabin.

Before You Book Your Flight

Your dog is your child, but the airlines don’t exactly see it that way (unfortunately).

The most important thing to remember when flying with your dog in the cabin is that there can be so many different rules depending on the airline – whether it’s the size, age, or breed of the dog, or even your travel dates (when the maximum number of pet carriers in the cabin has been reached for a certain flight).

So plan well ahead, and consider these factors… 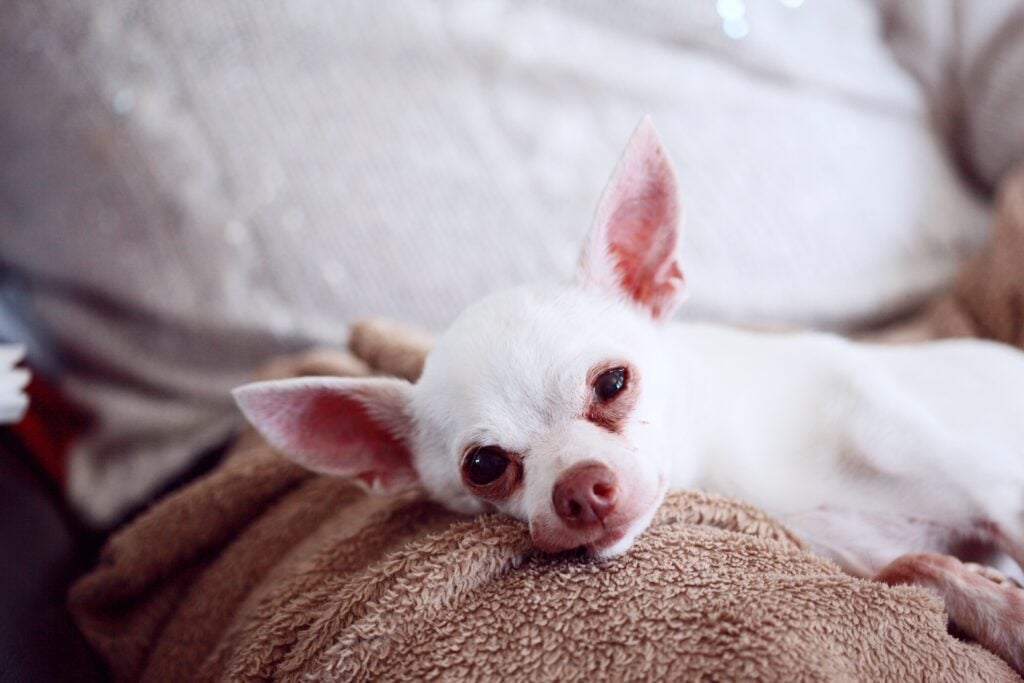 Your dog will need to fit inside a pet carrier, which needs to fit comfortably under the seat in front of you, or on the floor of the aircraft directly in front of your seat (and yes, this means less legroom for you, but parenthood is not without sacrifices).

Your dog has to be able to fit into the carrier with enough room to stand up and turn around, so don’t be tempted to squeeze your poor pup inside a carrier with no room to spare, since this will make for a stressful and uncomfortable trip (and airline staff might refuse to board).

For this reason, only small pet dogs are allowed to travel inside the aircraft’s cabin, and larger dogs will travel in the cargo hold (subject to the airline’s policy). 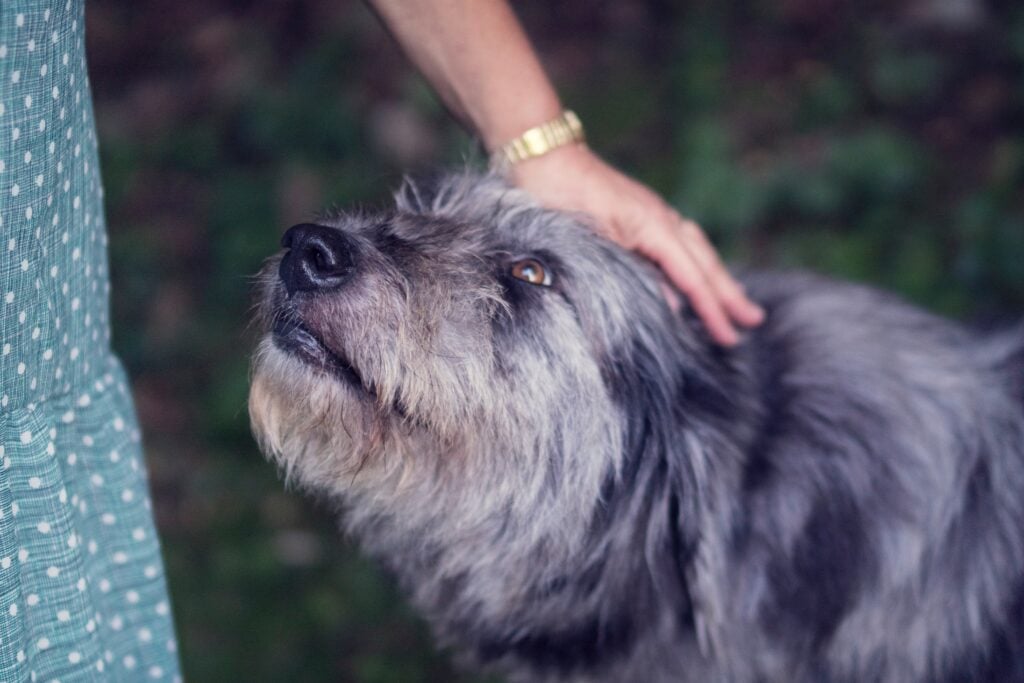 Many airlines will not accept young puppies, and this definition varies, but your dog usually has to be a minimum of 8 weeks old (or 10 weeks old if you’re flying with Delta). JetBlue has no age restrictions, but you must double-check any age restrictions before booking, otherwise, you (and your pooch) might not be permitted to travel.

Some breeds of dogs are banned from flying, either in the cargo hold or in the cabin. In addition to their age and size requirements, the airline might refuse to transport your dog if they have placed restrictions on the dog’s breed.

So if there’s any uncertainty, it’s crucial that you ask. Certain breeds can be banned due to their temperament (breeds thought to be dangerous) or if they’re brachycephalic (breeds with shortened snouts who might have difficulty breathing in the altered air pressure onboard the plane).

And There are Per-Flight Limits

Airlines only allow a certain number of pet carriers in the cabin per flight. You must confirm availability at the same time as you book your own flight. If the airline does not offer online confirmation and payment for a pet carrier, contact them directly, and the fee for your dog’s flight will need to be paid at the airline’s ticket counter on the day of departure.

A Note About Service and Emotional Support Dogs 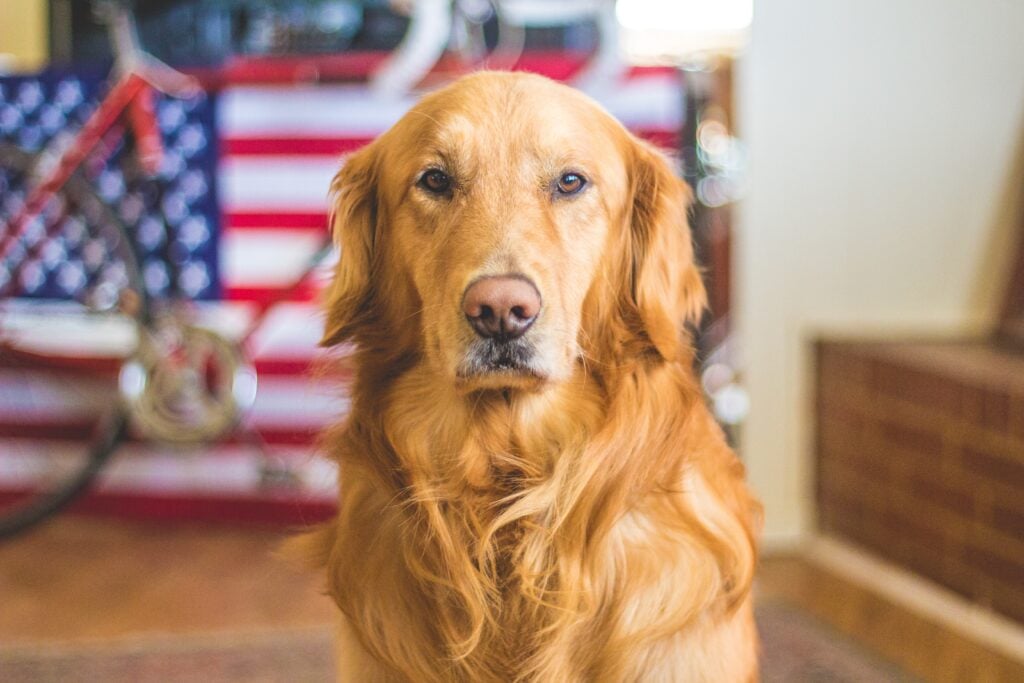 There is no federal registration for service dogs, although their right to accompany their human is covered under the Americans with Disabilities Act of 1990 (including on a plane).

Emotional support dogs are usually subject to the same restrictions as when you bring a pet dog with you in the aircraft’s cabin. And even though your pooch might give you a whole bunch of emotional support, you might simply be traveling with them as a pet.

Before You Head To The Airport

Get Your Dog Used to the Carrier Before You Fly

Even the most well-behaved pups can freak out when confined in an unfamiliar setting, so make sure they’re used to the carrier long before you set foot on the plane. Do not purchase a carrier until you’re sure that it meets the airline’s size and weight restrictions (ask your chosen airline if you’re unsure).

Related Reading: Flying with a pet carrier – how to have a stress-free flight

Rehearse the Sounds of Flight 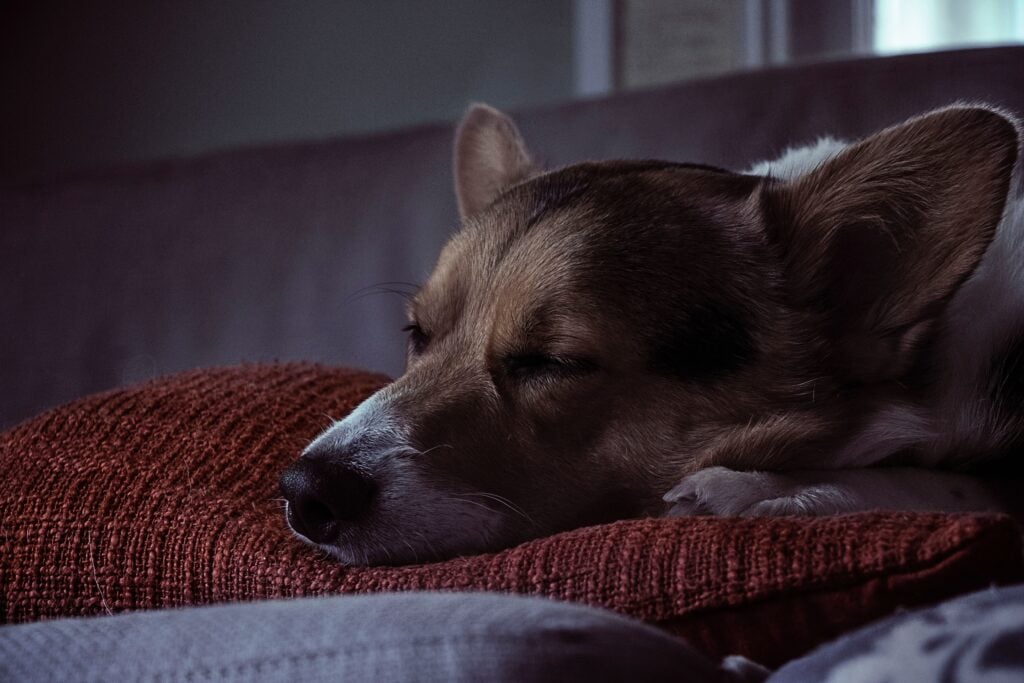 The constant hum of the aircraft’s engines from inside the cabin can be distressing for your dog, if only because they’ve never heard this noise before.

Overnight, while your dog sleeps, try playing an extended recording of what it sounds like inside the cabin. The sound should hopefully just be background noise by the time they have to experience it for real.

Pack for Your Dog

Your dog will need a few things for the flight:

Make sure they’ve had plenty of exercises, perhaps even more than usual, so that they’re tired out. It’s smart to feed them a reduced amount of food on the day of travel to avoid an upset stomach.

You might also want to remove their water dish a few hours before you leave, so their bladder is as empty as possible (although they’ll need to stay hydrated while on the plane). 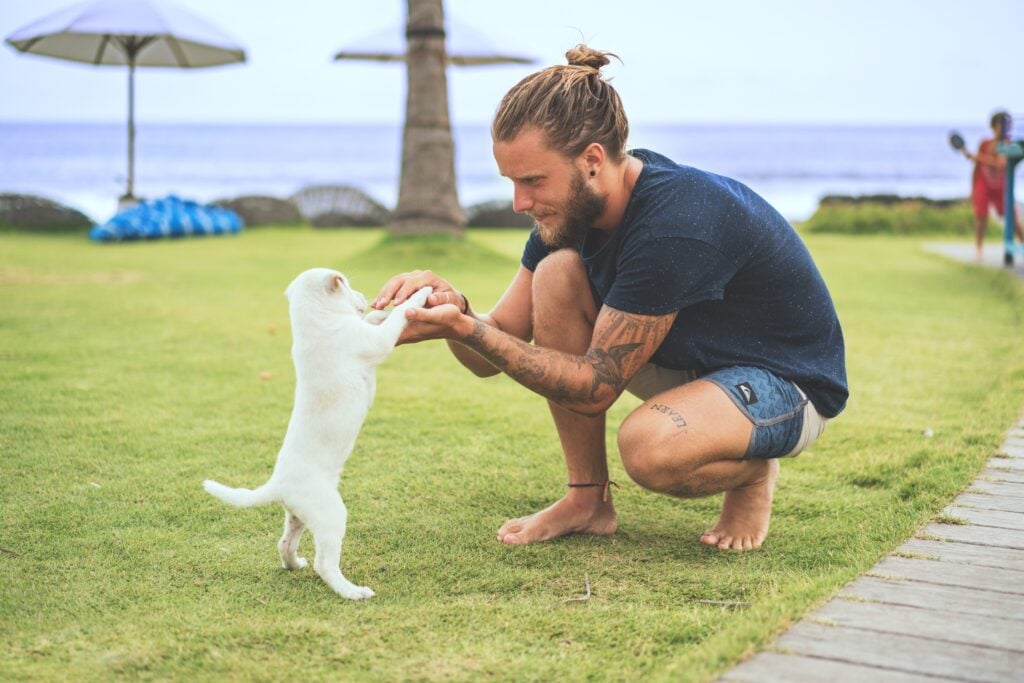 If possible, allow your dog a short walk so that they have a final chance to stretch their legs.

Be sure to ask at the airport information desk if this is permitted (major airports often have a service animal relief area for this, and it also allows your dog to go to the toilet). You will need to check in with your dog, even if you’re only flying with carry-on baggage.

Airline staff must inspect your dog to make sure it (and the carrier) complies with their size and breed regulations, and some airlines require the surcharge for the dog’s flight to be paid at this time.

In most cases, you will be instructed to remove your dog from their carrier and carry them through the metal detector, while the carrier is x-rayed.

Their collar might need to be removed so that it doesn’t set off the metal detector, but TSA staff will direct you. Going through security and using a service animal relief area will be the only times your dog will be allowed out of their carrier. 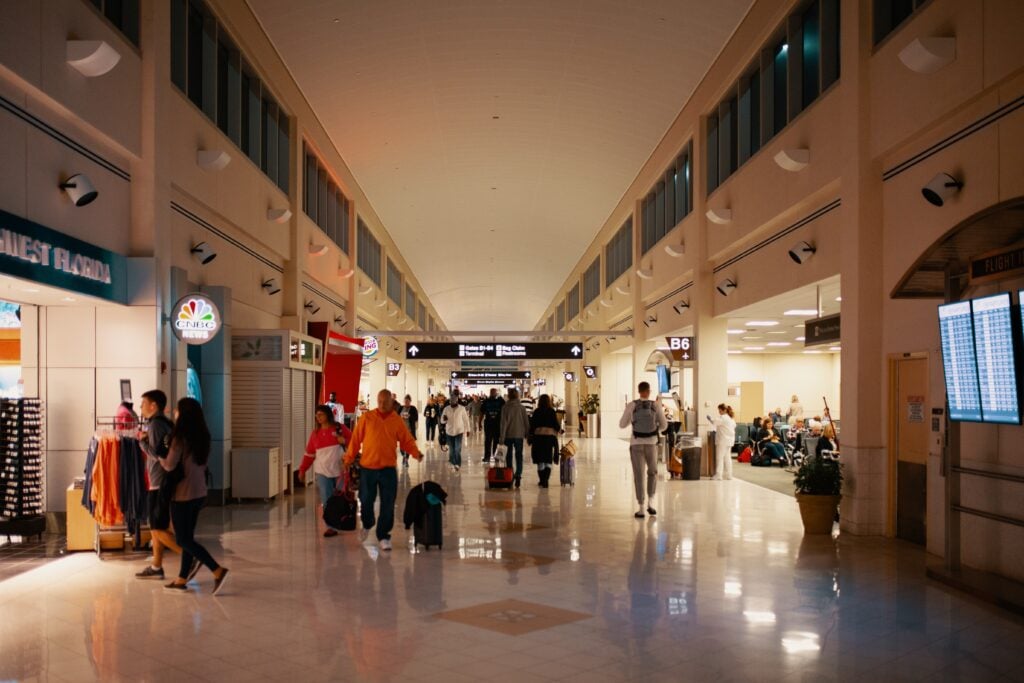 Getting on the Plane

Stow your dog’s carrier under the seat in front of you as soon as you board. You might want to tell the passenger directly in front of you that there’s a dog under their seat (so they don’t accidentally kick this precious cargo).

Flight attendants should also be informed, and while this isn’t essential, it gives them some advance warning just in case you should need any additional assistance during the flight.

Don’t open the pet carrier without getting permission from a flight attendant, as the airline’s policy might require it to be closed unless the dog needs to be taken to the toilet.

But it should be possible to give your dog a comforting scratch on the head and be sure to reassure and praise them, especially during takeoff and landing.

There’s a fine line between not wanting to dehydrate your beloved pooch, and not wanting them to pee inside their carrier. Give them small amounts of water (a few laps of the tongue) throughout the flight, and make sure you keep an eye out for signs they need to go to the toilet.

When Your Dog Needs to Go to the Toilet…

Just like any passenger, your dog might need to go to the toilet while on the flight. You’ll (hopefully) spot the signs when your dog has to go, and you should quickly take them to the aircraft’s toilet, place a puppy pee pad on the floor, and let them do what they need to do.

If your dog poops, pick it up using toilet paper, flush it, and ask a flight attendant about the best place to dispose of the pee pad (that antibacterial hand gel will really come in handy at this point). 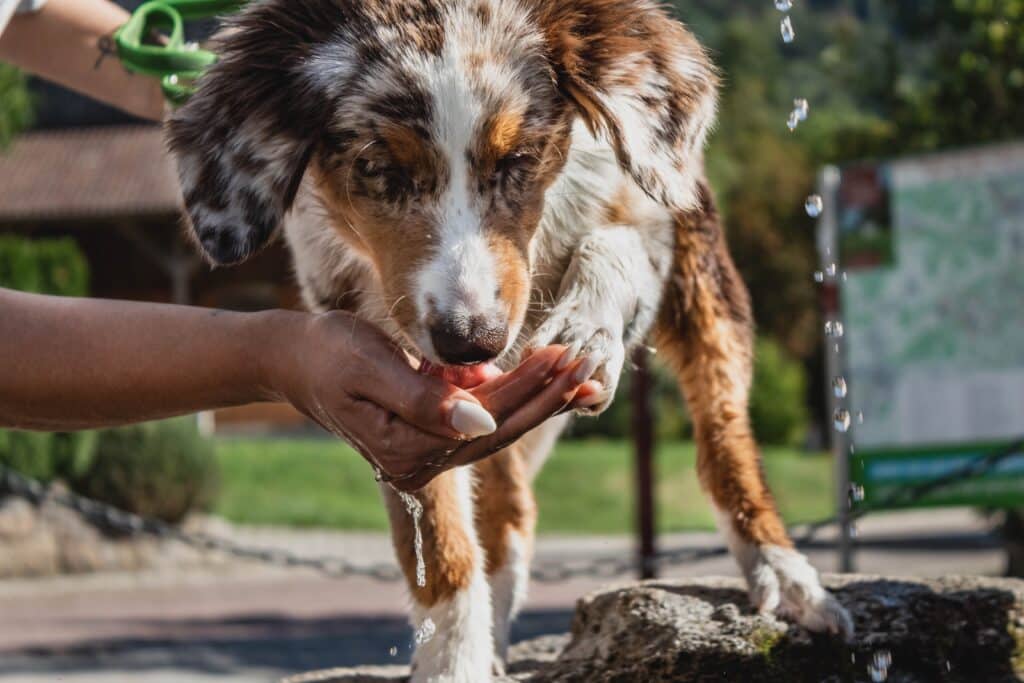 Another thing that’s going to come in handy is the list of service animal relief areas at airports.

Your dog will need to stay in their carrier but should be taken to the relief area as soon as you get off the plane, where they can be released, get the circulation back in their legs, and perhaps use the toilet. They can also be given water, and maybe a small snack if they’ve gone for a while without eating.

If you’ve ever traveled with a young child, you’ll know how complicated it can be. It’s the same when you fly with your four-legged child, even though it’s a different type of complicated.

Just remember that you absolutely have to be sure that your dog and its pet carrier meet the airline’s individual requirements and that you’ve booked as far in advance as possible to make sure that your dog’s spot on the flight can be confirmed.

It’s all going to be worth it when you and your best friend get to take a vacation together.