Most people with a dog will quickly realize that canines display some slightly strange behaviors when they go to the toilet. You’d be forgiven for assuming that your dog is terrified of his or her excrement by the fact that they often take off like a bat out of hell the moment they’ve finished a bowel movement – but the truth is quite the opposite!

Naturally, it’s not always as simple as this – nothing that involves dog psychology ever is easy to understand. This article will talk you through the varied behaviors that a dog may exhibit where their bathroom breaks are concerned.

My Dog Freaks Out After Pooping

Once a dog has finished pooping, they don’t flush a toilet, wash their paws and hope that nobody noticed them before wandering into the bathroom holding a copy of Cosmopolitan.

Instead, they get a nose filled with the smell – and they are often determined to share that aroma with all and sundry. The easiest way of doing this is to race laps around the area they have just pooped in, making as many circuits as they can before the smell dissolves. It’s a calling card for other dogs in the area to come to find your dog and to claim everything as their territory.

There are potentially other reasons for this though, as explained by Cuteness.

Some of the possible explanations include:

As we have said, racing around after taking a poop is nothing special or unique to your dog, especially if they calm down afterward. As long as your dog does not display any signs of aggression or physical discomfort, leave them to it. It will be advisable to aim to get them onto a comfort break schedule, however, as this way you will be able to ensure that they are in suitable surroundings for this burst of energy.

My Dog Runs Away While Pooping

If your dog seems determined to impersonate Usain Bolt while they are still halfway through the process of pooping, it’s usually a matter of impatience. They are keen to engage in any of the celebratory reasons listed above, and they can’t wait for the appropriate moment to do so.

A dog seemingly scared of their poop and running away from it is quite funny to watch. The same applies if a canine engages in a fecal tornado, spinning around on the spot. The only trouble is it means that they’ll be leaving a trail of poopy destruction in their wake, and it will be your responsibility to hunt all of that down and clean it up. That may be when the laughter stops.

Try to keep your dog calm while they do their business by offering soft, reassuring vocal commands – “good boy” or “good girl” will usually do the trick. Don’t try to physically restrain your pet though, as this could lead to a negative thought process surrounding elimination.

My Dog Goes Crazy Before Pooping

All dogs have a different relationship with their need to poop and will react in different ways. Some dogs announce their need to go to their owners by barking, growling and generally making a fuss until they have been leashed up and taken to the park. Others will sit quietly by the front door, looking a little jittery and waiting for you to notice so you can take them. Other still will be wholly indifferent and do what needs to be done when they’re out for a walk anyway.

A whole new sub-section of poop-centric behavior is seen in some dogs, but especially puppies – going crazy and charging around the house like an over-caffeinated bumblebee. This is perfectly normal behavior in puppies, and nothing to worry about or call the vet. It’s a useful way of getting an unmistakable warning that your dog needs to be taken out to use the bathroom.

Vet Street also discuss the phenomenon known as ‘the poop dance,’ which usually revolves around hopping from foot to foot and rushing around in a circle, similar to when they’re chasing their tail. Also like chasing their tail, this is nothing to worry about as long as the behavior stops after the poop. It’s just a matter of picking the perfect spot and making sure that everything is just right. Dogs usually aren’t crazy about pooping in public, and they’re not likely to use the first place they come across unless they are desperate.

Why Does My Dog Go Crazy After He Poops?

Going crazy and running around after pooping is one of those baffling doggie behaviors, but it’s actually very common and totally normal. We can’t possible know for sure, but dog experts’ best guess is that your dog is just excited and happy that an uncomfortable sensation has gone away!

It’s also possible that they’ve been rewarded for pooping in the past – such as being lavished with praise and affection when they were first being trained. Alternatively, their craziness after pooping might have been rewarded if you find their antics funny and cute!

Bottom line (pun totally intended): if you’re not bothered about your dog getting excited after pooping, chalk it up to general canine weirdness and don’t worry about it. If you are bothered about it – because it’s disrupting your walk, for example – make sure you’re not rewarding it unintentionally with too much attention. If you ignore the behaviour and instead reward him with praise for calmly waiting for you to continue walking, the behavior will gradually fade.

My Dog Seems to be Scared of Pooping

Some dogs seem to have a strange aversion to pooping. Again, it’s something that we may not necessarily be able to understand as humans – after all, surely it’s uncomfortable to carry that waste around unnecessarily? But your pet will have their reasons.

Some of the possible explanations for a dog being reluctant to eliminate include: 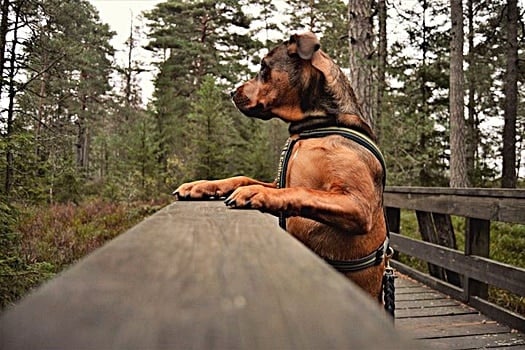 If any of these situations apply to your dog, there are steps that you can take to make things better.

A dog that is scared to poop is a very uncomfortable dog, so do whatever it takes to get them over this psychological hurdle – it will be no fun at all for a poor pooch to live in fear of emptying their bowels.

My Dog Stares at Me While Pooping

This is another dog behavior that humans find utterly baffling – and, in many cases, a little unsettling. Surely emptying out bowels should be a private experience and one that requires a little privacy? If your partner or spouse called you into the bathroom to watch while they did their business you’d probably have some dire questions to ask of them.

When we filter this action through a dog brain, however, it starts to make a lot more sense.

Stop and put yourself in Fido’s metaphorical shoes for a moment, breaking down the experience as follows:

Do you see where we’re going with this? Your dog is staring at you while they take care of their business because they’re saying, “you better have my back here, pal – I’m trusting you.”

If it’s any consolation, you may notice your dog returning the compliment and following you into the bathroom. A sweet gesture, but ultimately one that we could all do without!

Dogs like to be clean, and last we checked, there was no such thing as canine toilet paper in the average park. Dogs clean and wash themselves using their tongues, and they express their affection for their beloved humans with the same organ.

Dogs have very short-term memories, and they don’t necessarily link two states of affairs together. They don’t understand the fact that they peed in the house, then got in trouble when you came home an hour later. They don’t connect that if they do what you ask of them during training, they receive a treat if it doesn’t follow almost immediately. And, yep, they don’t grasp that licking their behind isn’t the most appealing preparation for smothering you with kisses.

If you’re keen to avoid this, you’ll have to be consistent and prevent your dog from ever licking your face. Some may consider this to be sound advice anyway, given that canine mouths can be breeding grounds for bacteria if their oral health isn’t up to snuff. One thing is for sure – your dog cannot be expected not to clean himself or herself up after they have pooped.

If you need to coach your canine out of licking your face, take a look at our guide to how to calm an overexcited dog naturally and consider using some of the techniques found within.

My Dog Keeps Burying Its Poop

We’re not sure if you have ever noticed this, but dog poop tends to smell a little potent. We can typically detect a pile of doody from many paces, so imagine how powerful that aroma can be for a canine, who enjoys a sense of smell roughly 40 times better than the average human.

Every poop smells different to a dog – and an interested hound will be able to identify a dog by their waste, just like they can through urine. If your dog is determined to bury their poop, it suggests that they are intimidated and do not want to be detected by other dogs.

It could be worse, though – some dogs eat their feces in a condition known as coprophagia. If you have noticed your dog developing this habit, check out our guide on how to stop your dog from eating poop naturally.

Dealing with poop is something of a rite of passage for many new dog owners, who need to come to terms with the fact that they’re now responsible for another living creature’s waste.

It pays off to learn about your dog’s relationship with their bowel movements, as not only will you want to get them onto a schedule, they can often reveal the secrets of your pet’s health. It may not be the most glamorous side of dog ownership, but it’s one of the most crucial.