I
f you should happen to catch a flight to Aberdeen Airport in Scotland, then you’re in for a treat!

The airport employs a number of adorable therapy dogs for nervous passengers to cuddle, with the idea being that these furry four-legged staff members will help to calm anyone who might be anxious about flying.

It’s not only humans who can be anxious when it comes to getting on a plane, so how can you help to de-stress your nervous dog before and during a flight?

Of course, there are levels of anxiety, and maybe your dog only ever becomes slightly nervous under certain circumstances, or maybe they simply have a nervous disposition.

You might need to utilize all of the suggestions on this list, or you might only need one or two. You’re the one who knows your dog best, but it’s also important to know that there are effective ways to manage your dog’s anxiety when you take a flight together (no matter how anxious they might be).

1. Try to Take a Non-Crowded Flight 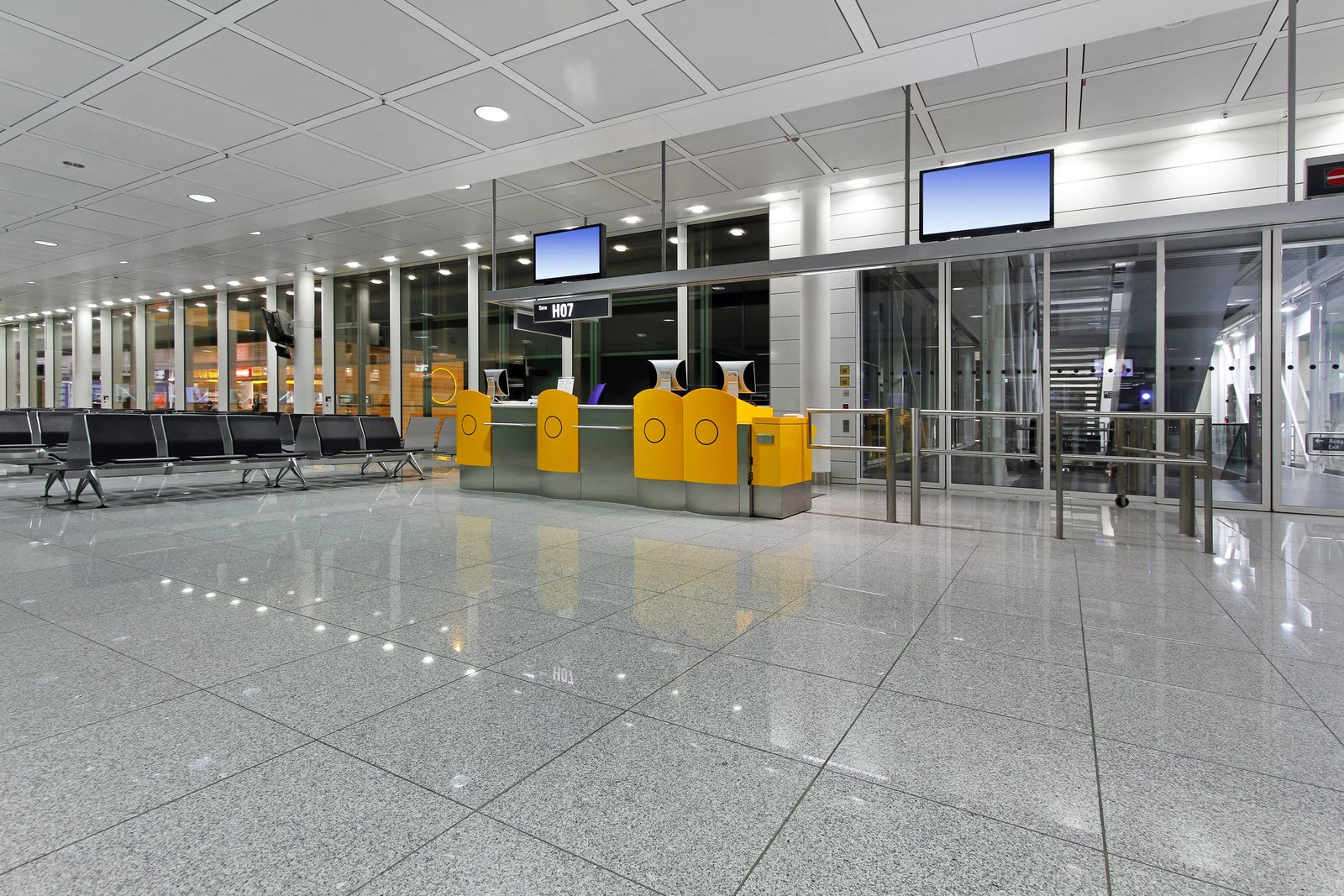 Have you ever seen a movie on a weekday afternoon? Bliss! The theater is mostly empty.

You’re not going to be irritated by loud snackers. You won’t be distracted by people who think of a movie as the perfect time for a (probably boring) conversation. There will be no people who are unable to leave their darn phones alone for a couple of hours (or even a couple of minutes).

Try to use this basic concept when booking a flight for you and your dog, to avoid the potential problem of crowds. A good rule of thumb is to avoid the usual suspects in terms of peak travel, namely Christmas and New Year’s, Thanksgiving, spring break, and summer vacation.

An off-peak flight is going to be less crowded (along with the airport), and so there will be less noise and confusion, which can assist in easing your dog’s anxiety.

When off-peak flying is unavoidable (because you can’t take your dog on your summer vacation during fall), you should check in with your dog as late as possible while still giving yourself enough time to clear security and board the plane. This at least minimizes the amount of time your dog has to spend inside a crowded and noisy airport.

2. The Pet Carrier Should Be As Familiar As Possible

Don’t make the mistake of buying a brand new pet carrier for the flight just a couple of days before the flight. Hey Fido, you might be an anxious dog, and now you’re going to be crammed into this unfamiliar container and taken to an unfamiliar place. Doesn’t sound like a recipe for a peaceful pooch, does it?

Make sure your intended pet carrier is approved by the airline before you buy it (check the required dimensions on the airline’s website if you’re not sure), but buy it as long before you fly as possible (as soon as you actually decide to take the flight is best).

Let your dog interact with the carrier, so they can smell it, sit in it, and even play with it (without damaging it, of course). This means that while they will be in an unfamiliar situation, they will feel safe within their now-familiar carrier, which should hopefully help to minimize their anxiety. 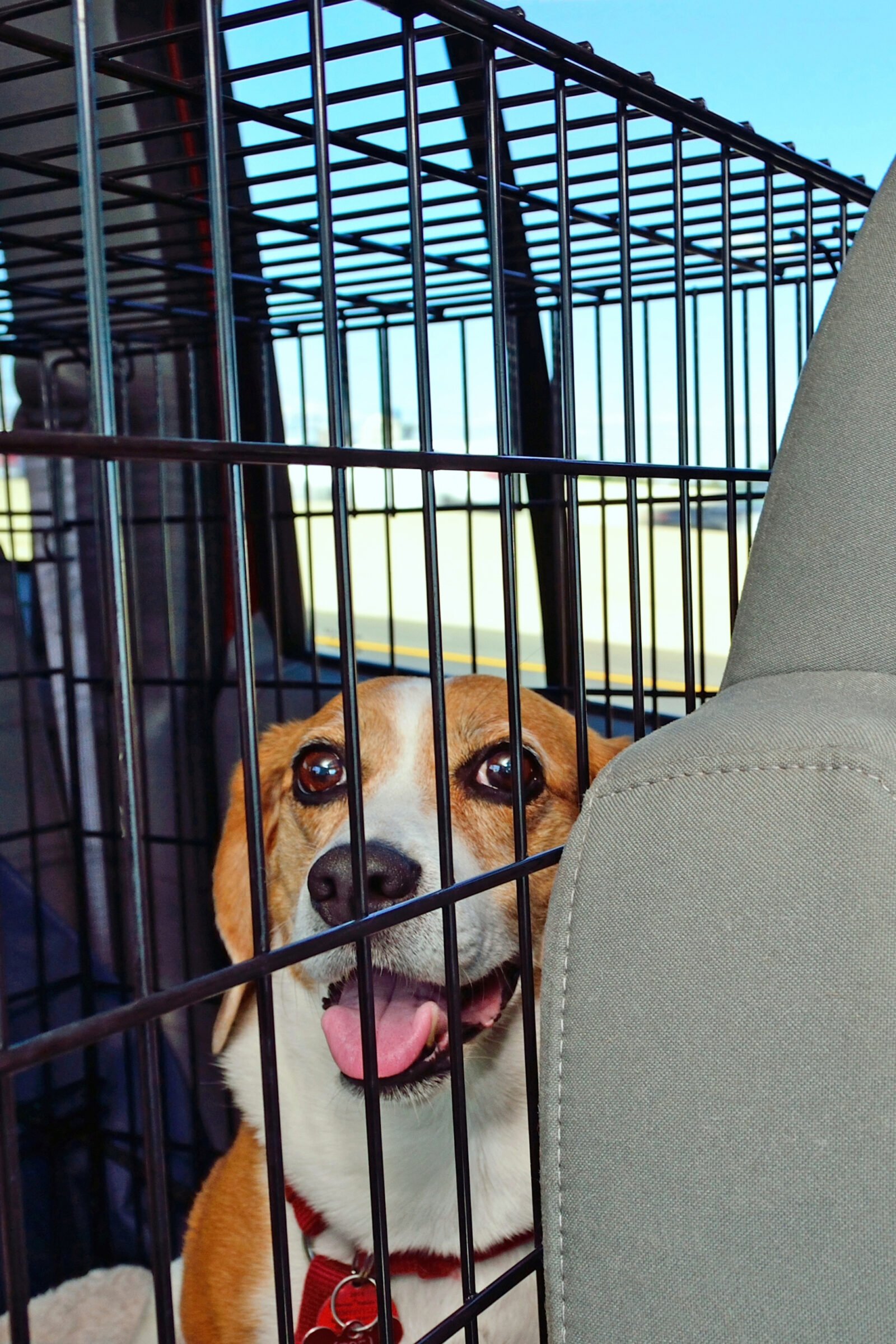 3. Get Your Dog Used to the Sounds of Flying

The sounds of a jet airliner can be at a high pitch (to put it mildly), and if it’s loud and confronting for you, just imagine what it must sound like for a dog (especially an anxious one).

Get your dog used to the sounds of takeoff and landing, by playing them audio of the sounds, while you’re there to comfort them. Make it fun, make it familiar, so when the day of the flight arrives, your dog won’t be so alarmed by the noise of the jet engines lifting you both off the ground.

The noise inside the cabin isn’t going to be as extreme, but you might want to familiarize your dog with these sounds via an audio recording too. It might feel a bit strange to sit around with your dog, listening to planes taking off and landing, but it can be helpful.

4. The Comfort of a Blanket (or a Shirt)

Does your pooch have a blanket of their own, and if so, will it comfortably fit into their pet carrier? Resist the temptation to wash it before you travel, since the scent will remind your dog of home (a safe space for them) and can have a soothing effect. Don’t forget that scent is a dog’s primary sense (instead of sight, as it is with humans).

Another option (instead of, or in addition to their blanket) is to put one of your shirts into the pet carrier. Make sure that it’s unwashed, since having your scent right next to them (in a way that it can be separated from the unfamiliar scents of the airport and plane) can be calming.

If your dog doesn’t have a blanket, maybe buy them one specifically for the flight. Make sure you do this as far in advance as you can, so your dog can sleep with it at home and get their own scent onto it. 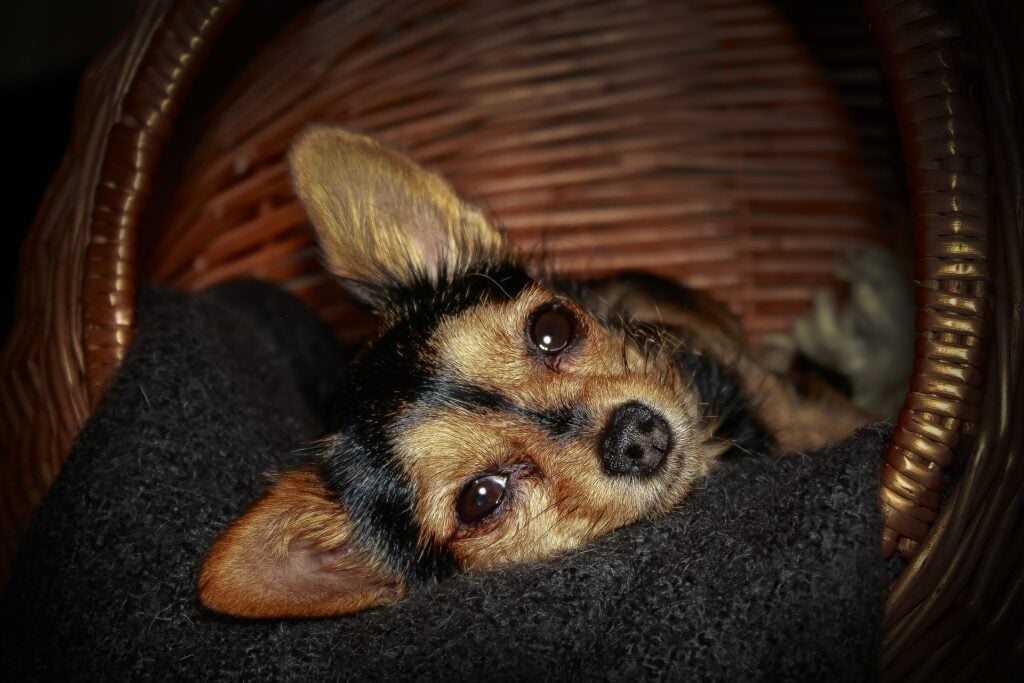 It’s a similar psychological trick to using a blanket, but if your dog has a favorite toy that can fit into their pet carrier without taking up too much space, then you should pack it. It should not be a squeaky toy or anything that makes noise.

A chew toy is your best bet, since the act of chewing could prove to be a valuable distraction for your pooch during a potentially anxious time.

If they don’t have a favorite toy, try buying one before you fly and playing with it as much as possible before the flight so your dog associates it with a positive experience. Be sure to choose a quiet toy that’s not too large for the pet carrier.

Obviously you don’t want to starve your dog just so you can take a flight. It might seem like a full dog is a happy dog, but this can be a false economy when you fly (even if you’re actually flying in economy).

A stomach full of food can lead to nausea on a flight, which can lead to distress, which can increase their anxiety levels. The official recommendation is that your pet should have their final pre-flight meal two to four hours before you arrive at the airport.

It’s best to give your pet as much time as possible to digest their food, so maybe aim to feed them four hours before you get to the airport.

Yes, you can carry treats if you know that this will calm them if things get out of hand on the plane, but be strategic about how many treats you actually give them.

7. Be Careful of Other Passengers 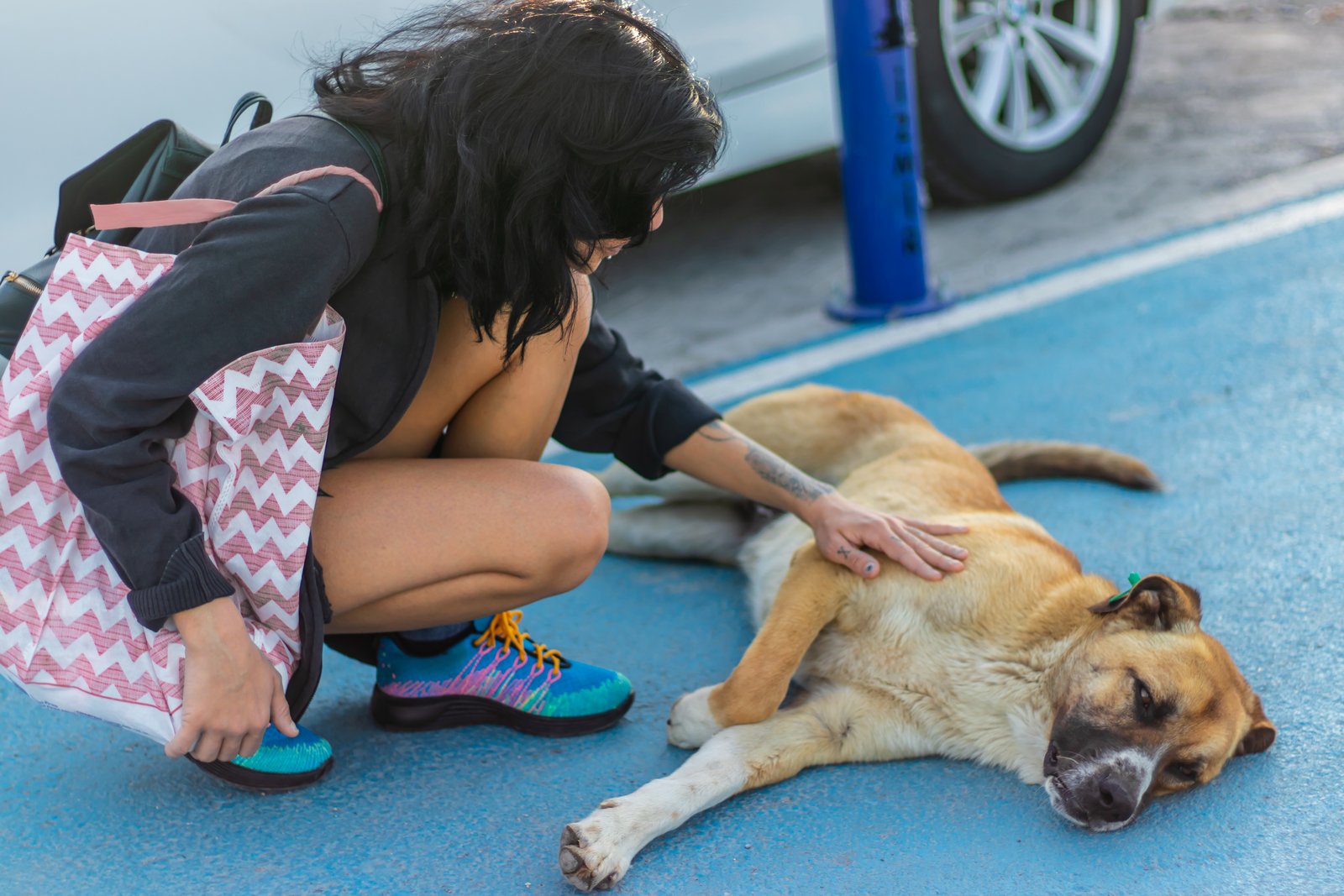 How many times have you seen a cute dog and wanted to immediately give them a scratch behind the ears, with asking the owner’s permission often being a secondary thought? It’s going to be the same when you fly with your dog, but when your particular pooch is dealing with some anxiety issues, you need to be alert.

Most people will ask before they pet a dog, but some (particularly children) can just go for it. You need to be ready to inform whoever is reaching it for a cuddle that it’s unwise because your dog is feeling a bit unsettled.

Your dog will be in their pet carrier most of the time, and you might choose to open one side of the carrier so they can poke their head out.

Since your dog is untouchable inside the carrier for most of their journey, it won’t be so easy for someone to sneakily pet them, which is helpful. But if you should ever be occupied or unavailable, like when you take a nap during your flight, make sure the pet carrier is sealed.

Cesar Milan (who you might know as The Dog Whisperer) suggests aromatherapy can help. No, you don’t have to take Fido on a spa day to sample different types of essential oil (even though that might be fun), but you can use lavender oil, which is known for its calming qualities. It has anti-anxiety properties and even helps to promote sleep.

But how should you use it with your dog?

It might even help to calm you down too! Because it’s important that you stay calm when you fly with your dog. 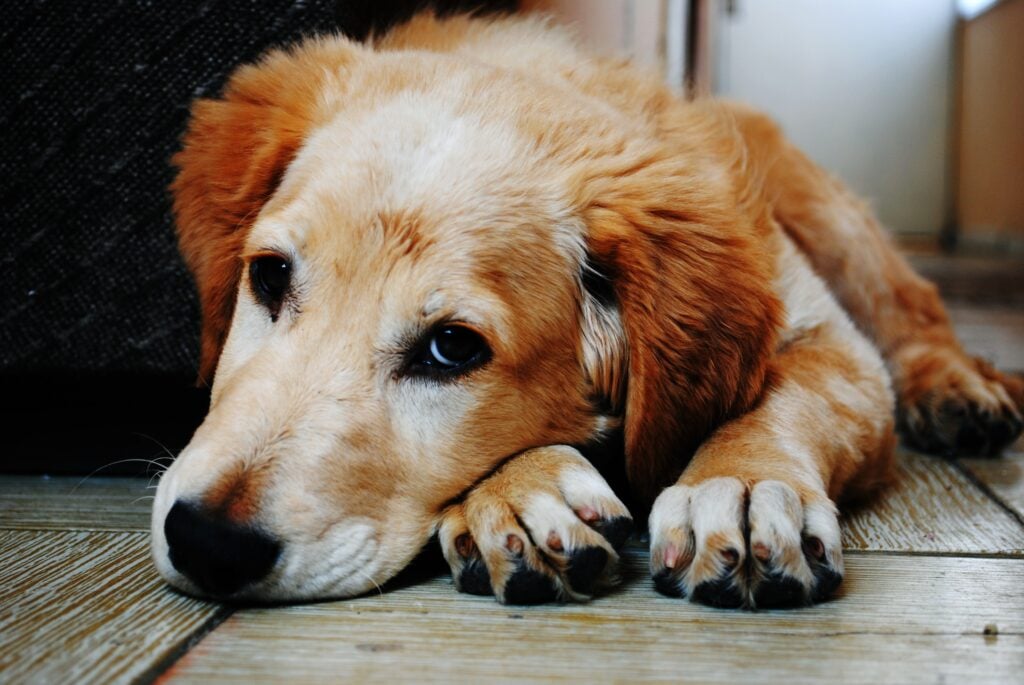 A study carried out by the University of Lincoln’s School of Psychology has found that by “combining information from different senses, dogs form abstract mental representations of positive and negative emotional states in people.” So… what does this mean?

If you’re anxious about how well your dog is coping with the flight, this can amplify their own anxiety. If you stay calm, your dog will be able to sense this, and it can help them to stay relaxed.

10. The Chemical Solution (When All Else Fails)

If you have serious worries about how anxious the flight will make your dog, then sedation can be an option, but it should only be a last resort. You might be basing this need for medication on your dog’s disposition and personality, or maybe it’s because of how they reacted on a previous flight.

Some airlines will not transport a dog that has been given tranquilizers, and you might need to sign a declaration to this effect before you board. If you’re thinking about sedating your dog for a flight, you need to be sure that your chosen airline will allow it. Why is the thought of a tranquilized dog cause for concern?

It’s thought of as being a bad idea (unless it’s absolutely unavoidable), because sedation can increase the chance of heart damage or respiratory distress. Also, your dog might not be able to steady themselves in the event of turbulence, which can lead to injury.

Sedation is a discussion you need to have with your vet, and make sure you do this as soon as you know you’ll be flying with an especially anxious pet.

It’s crucial to follow your vet’s instructions to the letter, as in the precise dosage and when to give it before the flight. A sedative doesn’t always mean sleep, and so don’t be worried if your dog doesn’t fall completely asleep, since the type of sedative and the dose might only be intended to calm your dog, instead of knocking them out.

Make sure you travel with the prescription for the sedatives, so you can avoid any potential problems with airport and TSA staff.

Therapy dogs can be useful to help sooth nervous passengers (so maybe consider booking a flight to Scotland), but when it comes to your anxious dog, just remember that you’re their therapy human.

Staying calm for your dog is about the most important way you can give them the emotional support they need, but even when this isn’t going to be enough, there are plenty of other options for you and your four-legged traveling companion.