On the day I adopted my Australian shepherd, I took him home and introduced him to the house, before going for a long walk and playing with him all day at the park. I wanted to make sure he was good and tired by the time we got back.

Everything was alright for a while, and I was falling deeper in love with him every minute. He settled in on the couch with me for a few hours until I decided it was time for bed at about 10 pm that night.

That’s when the drama began. You see, I knew all along that crate training was very important during that first one to two months, so I had gotten him a nice crate that I was praying he’d take to. I filled it with toys, and he had been in and out of it all evening.

However, that night, as soon as I shut the crate door and left the room, he started whining and barking and generally just freaking out. And this went on for hours!

While some dogs don’t have issues when introduced to their crates, some dogs do not adjust too well to them. If you want to make sure that your dog adjusts well to his new home, try to avoid being too attentive to him while he’s in there. Also, don’t remove him from the crate once the whining starts.

It is, however, important to keep in mind that while the whining is totally normal, you should also be watchful for anything unexpected or excessive whining. Try to help them feel less on edge by providing distractions and keeping the crate near you so you can tell when he needs to be let out.

The number one rule you need to keep in mind is that the size of the crate you use is essential. It should neither be too big or too small. Your dog should be able to turn around in it, lie down, and even stand on his two back feet without any difficulty.

Next, never constrain your dog into any crate. Avoid using force to put your dog inside them, because this is what creates separation anxiety.

Additionally, never force your dog out of his crate. Remember, this is supposed to be his safe space. Don’t use force whenever he’s in there because he will stop seeing it as a safe space. Everything about the crate should be good and safe from your canine’s point of view.

Finally, indulge his needs with treats. Give him raw bones, chew toys, and whatever else he’s into. This will show him that good things happen to him when he is in his cage. 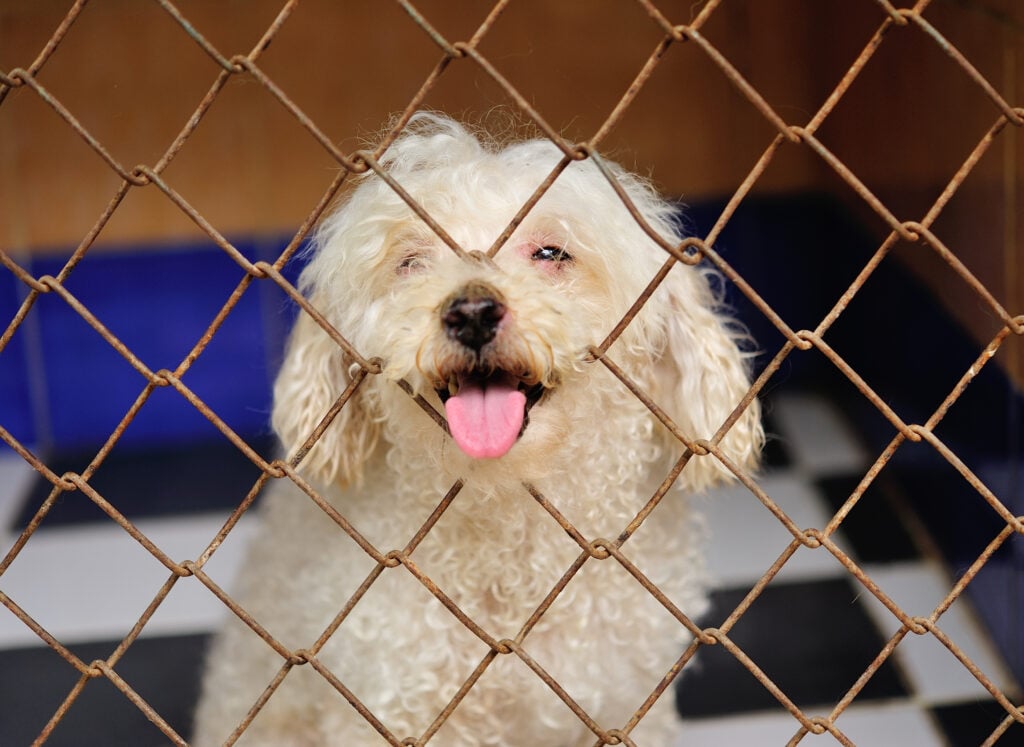 My Dog Won’t Settle in his Crate

Here is the golden rule: you want to train your dog to adore his crate as opposed to having to force him to endure it. To help you do this, there are a number of strategies you can employ.

How Do I Get My Dog to Stop Whining in the Crate? 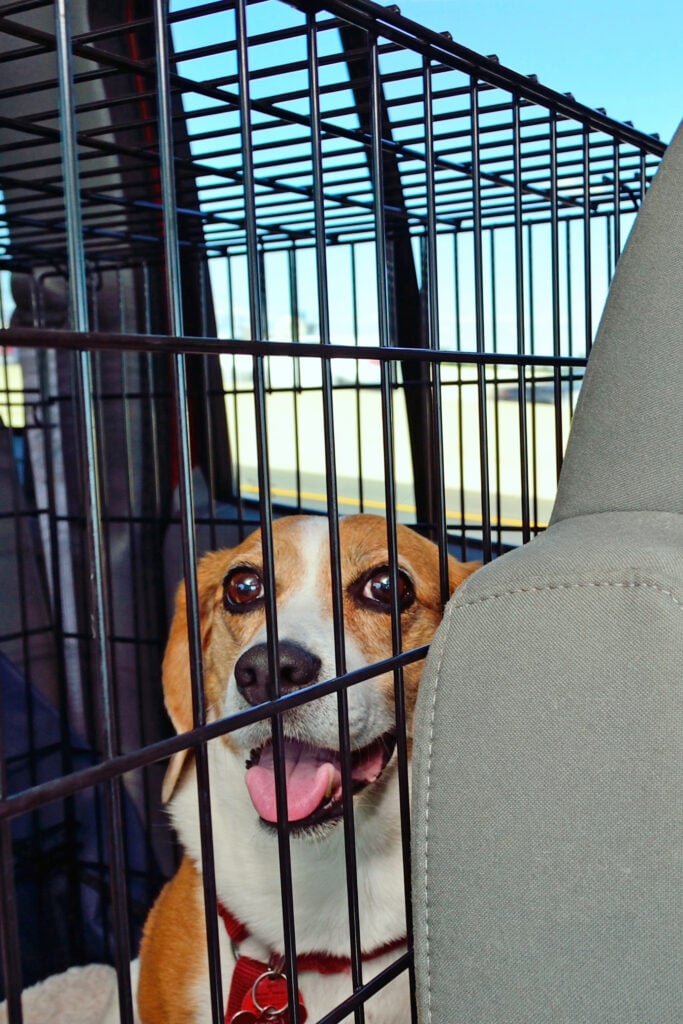 Well, the first step is to understand why your dog is whining in the first place. This can happen for a number of reasons:

Sometimes, dogs will whine because they absolutely need to be out of their crates. For example, if your crate-trained dog is suddenly anxious to leave his crate, he may need to poop or pee and he’s just letting you know that he needs to be out.

How to Calm a Dog in a Crate

Training your dog to be comfortable in his crate is the ultimate goal. Here are 4 canine training tips to calm him down:

It’s a lot simpler to train your dog to relax in a crate that he doesn’t have strong negative feelings towards. Start over with a different pooch crate if you suspect your dog’s relationship with his present crate is a negative one.

Also, if your dog has outgrown his crate, he might not feel comfortable in it. So the only thing to do here is to upgrade. Consider buying a crate that comes with a divider so your pooch can grow in it.

Never pull or push him out or into the crate. Also, vow not to lock him in before he is OK with it. These are the kind of things that trigger the negative emotions towards the crate along with separation anxiety.

Place a comfortable pad inside the crate to make it more welcoming and charming.

Also, some dogs love covered crates while others don’t. Experiment with this a little and try to find out whether he will enter the crate with or without the cover.

You can also place a bunch of his toys inside the crate to make the space even more fun for him.

Sneak a few treats into the crate whenever your pooch isn’t there. Once done, lock the door and wait for him to find out that there is something new and exciting in his crate. When he expresses interest to go in, open the door for him.

How Can I Make My Dog More Comfortable in the Crate? 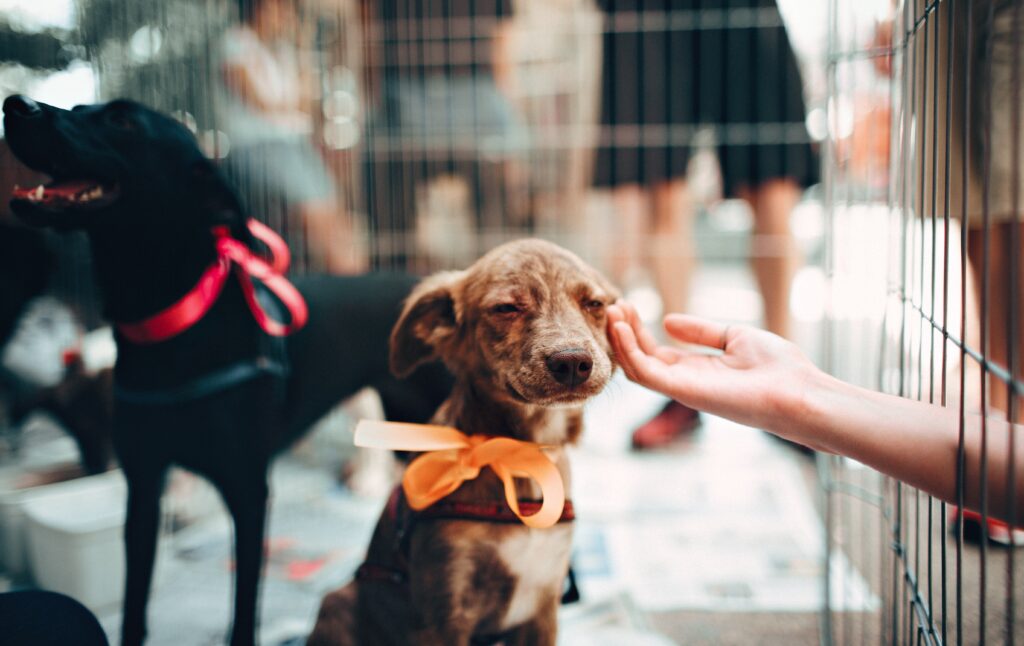 Your first step is to make sure the bedding is warm and comfy. Place some warm covers in there, and keep in mind that dogs, especially puppies, love to chew anything around them. So you choose a well-made, durable bedding.

Toys to Leave in a Dog’s Crate

Leave some tough bite toys in the crate for your doggy to chew on. This will keep him busy for a few hours, especially when you are not home. It will also stop him from chewing on the covers.

Don’t leave food and water in the crate, especially during those first few months

If you are still house-training your dog, leaving him some water in his crate is a recipe for disaster. You will have to deal with smelly bedding every day, which is definitely not fun. It is perfectly alright to leave them with no water for a couple of hours at a time to control how much they pee.

Why Does My Dog Suddenly Hate the Crate?

Was your dog perfectly fine with his crate for a while before completely changing his mind about it one day? Why does this happen?

One of the main reasons this happens is because the crate space stopped being comfortable. This has happened on several occasions with one of my other dogs. I have found that the only way to solve this problem is to start over and re-crate-train your dog.

Start by making it a comfortable spot to be in by making sure the bedding is cozy and filling it with his favorite toys. I’d also suggest getting a big bowl of some tasty cooked ground meat and placing it at the extreme back end of the crate to encourage your dog into spending time in his crate.

Your next step will then be to let him into the cage without shutting the door. This will make him feel less frightened because he’ll know he can come and go as he pleases.

When your dog is finally going in and out of his crate without being forced, reward him with a treat. You can also place another bowl of food in his crate and gently close the door behind him.

Joint pain can also make your dog wake up one day and hate his crate.

The best way to fix this is to make the crate comfortable enough to avoid triggering the joint issues. This means making the bedding as comfortable as possible or even buying additional pads to allow for that extra level of comfort.

If you suspect joint pain is the reason behind your dog’s refusal of his crate, it is also wise to visit a vet as soon as you can.

There could be a whole host of reasons behind a canine’s abrupt hate for his crate. If this change comes with an unexpected change in his usual behavior, you should visit your vet and have him looked at.

Meanwhile, try to figure out what the specific needs of your dog are. Does he simply want to spend more time with you? Will he be destructive if you let him out of his crate? If he proves to be trustworthy, you can experiment with giving him more freedom.

My Dog Panics in the Crate 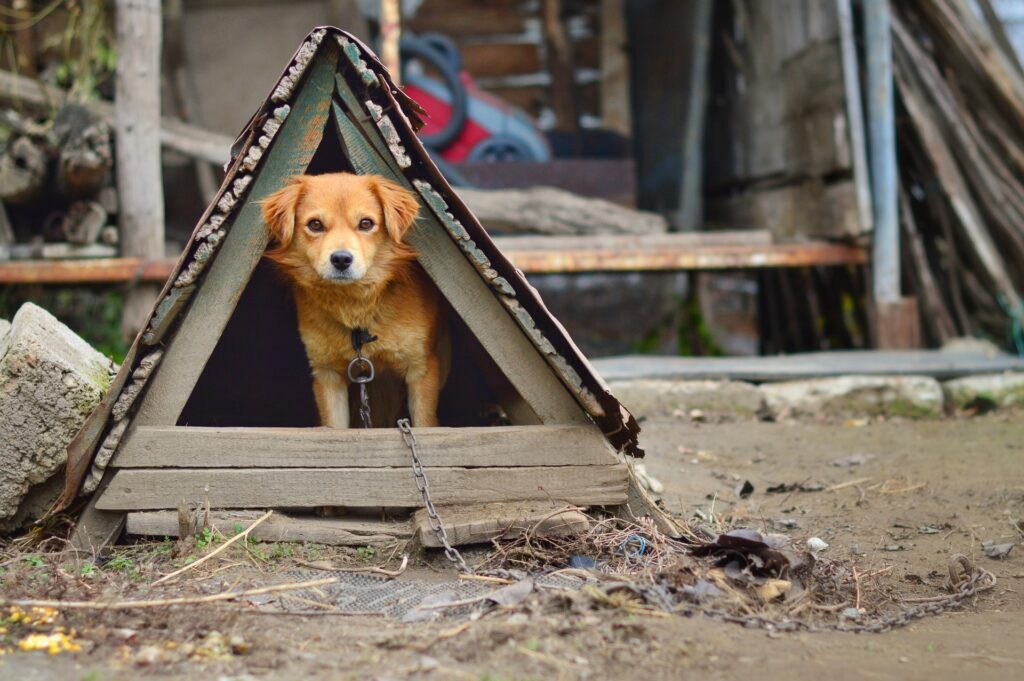 There are many reasons why your dog would panic in his crate. One of the main ones is separation anxiety.

Separation anxiety is a common but difficult issue that many canines and their owners have to deal with.

If your dog has separation anxiety, you will notice some or all of these things:

Dogs that have separation anxiety usually have panic attacks, just like humans do.

My Puppy is Screaming in the Crate for Hours

If your puppy is barking all night, chances are he is not comfortable with his surroundings.

To fix this, start by training him to love his crate. Most pups won’t love their crates on the first day. They think the crate is there to stop them from accessing all the things they love, including toys, people, freedom, and playing.

This is why it is important that you make your puppy understand that his crate is a place where he’ll get lots of attention, meals, and treats. Make the crate part of his daily schedule.

Offer toys and treats when he’s in the crate, and close the door for increasingly longer periods of time. Do this every day until he gets used to the crate. You could also consider covering your dog’s crate.

Additionally, pheromone sprays, such as the one shown below, can come in handy especially when it comes to keeping young dogs more settled in their crates. 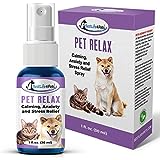 While crates can keep dogs from being destructive, they can get harmed while trying to get out of the crate. This is why proper preparation and training is essential, especially when you want to prevent most of the issues mentioned here.

If none of these strategies work, or if you think your dog has severe separation anxiety, consult your vet or a professional animal behavior specialist.