Separation anxiety is something that takes a lot of first-time dog owners by surprise. It will often lead to whining as your dog feels afraid. As sociable creatures by nature, dogs do not enjoy being left alone at any point – but with the appropriate training, they can be taught that it’s perfectly fine and nothing to worry about. After all, we always come home sooner rather than later.

Let’s delve a little deeper into the world of canine separation anxiety, and what can be done to prevent this condition from ruining your experience as a dog owner – and your dog’s own experience as a pampered pet.

What is Separation Anxiety in Dogs?

As the name suggests, it stems from fear, worry, and distress about being removed from the company of their owner. It’s particularly prevalent in puppies and younger dogs, but it can also manifest in older canines that have been adopted or rescued.

In short, it is a fear from your dog that you are going to leave them and not come back. It’s essential that you build a mutual trust with your canine companion. This will ensure that they understand that, if you’re leaving them at home, it’s for a good reason and you will be returning – ideally with treats.

A dog that suffers from this condition will be distressed, destructive and potentially dangerous to himself or herself if left home alone for any period of time. It’s a condition that needs to be managed and dealt with as quickly as possible, for both your sake and that of your dog.

What Causes Separation Anxiety in Dogs?

These are just some of the reasons that dogs encounter separation anxiety – there could be many more that are unique to particular breeds or individual canines. You should also ensure that your dog is not living with a generalized anxiety disorder, which is just as prevalent in canines as it is in humans.

Do Puppies Grow Out of Separation Anxiety?

Do children grow out of being afraid of the dark? The answer to both of those questions is usually yes, but it’s not simply a matter of maturing and realizing one day that there’s nothing to worry about. It takes time and reassurance to convince a dog that being alone isn’t scary – or forever. Failing to nurture your dog and deal with their separation anxiety could lead to the problem growing worse and worse.

Separation anxiety is a behavioral condition; something hardwired into dogs. After all, they are predisposed to be pets and to rely on their humans to keep them safe from anything that might do them harm, just like a young child. They need to be taught and learn to trust, that being left alone for a short period of time does not mean that something terrible is going to befall them and that it does not mean that they’ll never see their beloved human again.

My Dog is Traumatized After Boarding

This is somewhat common. Separation anxiety is caused by a fear that a dog’s owner will leave them and not return, and as far as a dog is concerned, being left in kennels or at a boarding facility is akin to abandonment. Throw in the fact that living in such proximity to other dogs may cause them to become unwell, and you have a recipe for discomfort. 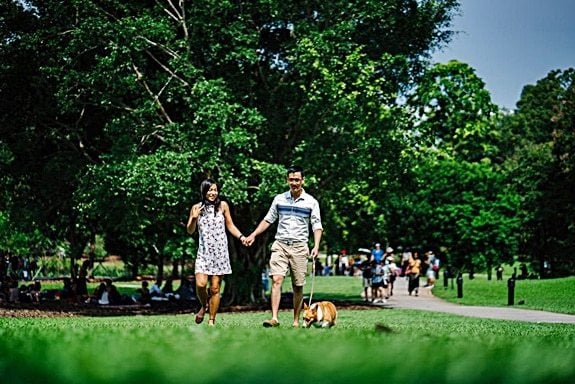 If you must go away for any prolonged period of time, consider asking a trusted friend or family member to take care of your dog – that means bringing your hound into their home, not leaving them locked up alone all day aside from an hour of visiting and changing water bowls.

In reality, though, you should not consider leaving your pet for any prolonged period of time. Being a doggy parent means that your furry friend tends to come with you wherever you go as part of a package deal.

Should I Get a Second Dog to Prevent Separation Anxiety?

No. This may be tempting, as you think that your second dog will keep the first company. What’s more likely to happen is that they’ll wind each other up, and you’ll end up with two fretful hounds on your hands.

You could try introducing a cat to the family if these theoretically warring species can get along, as this might at least prevent your dog from growing bored and weary while you’re out. It’s better to engage in a full training program, though. It may take more work, but both the dog and the owner will benefit from the effort in the longer term.

If you’re worried that your dog is exhibiting signs of separation anxiety, familiarize yourself with the symptoms and take action where necessary.

These telltale signs include:

Some of these problems are naturally more severe than others, however. Escape attempts can be dangerous, as your dog may harm their paws or teeth attempting to dog, claw or bite their way out of their location. For this reason, it is best not to leave your dog restrained by a crate or carrier while you’re away if they suffer from separation anxiety.

My Dog is Barking Due to Separation Anxiety

The most common sign of separation anxiety in dogs is loud, unashamed barking and howling. You’ll probably find that this starts before you even leave the house – dogs are pretty smart, and they know when something is up.

If your dog caps their behavior at barking, it’s upsetting (and annoying for your neighbors) but it’s arguably the least problematic of symptoms. You can check out our guide to preventing dogs from barking, Make sure that your dog’s barking doesn’t turn into anything more severe.

My Dog is Peeing Due to Separation Anxiety

When a dog has an accident indoors, it may not be an accident at all. Dogs frequently pee (or poop!) indoors if they are trying to send a message to their human.

This is not an act of ‘revenge’ – rather, something that feels appropriate to your dog, After all, separation anxiety must be terrifying for Fido, causing all kinds of sensations within a doggy body. This will leave your dog feeling unwell, and if they’re under the weather, a dog will want their human to know about it so they can help. 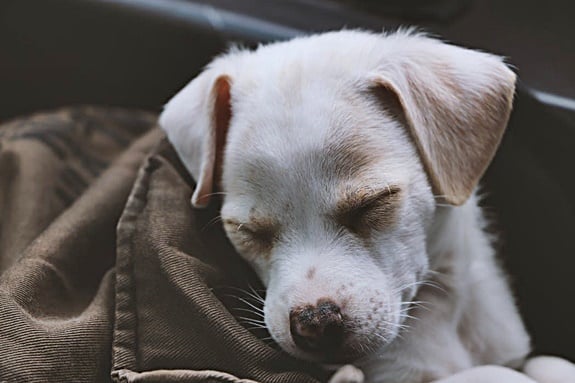 Alternatively, however, this elimination may be entirely involuntary – especially in the case of puppies, who have not yet mastered the link between brain and bladder. Your dog may also be peeing due to fear because they are worried that they are being left alone as a punishment.

One thing to keep an eye on is coprophagia, which is a dog eating his or her own poop. In some cases, an anxious dog may have an accident and then panic, deciding that eating the evidence is the easiest way of hiding it. Not only will this lead to some serious your dog having bad breath, but also it’s very unsanitary!

My Dog is Vomiting Due to Separation Anxiety

Some dogs may get themselves so upset and wound up by their separation anxiety that they literally howl themselves sick. Vomiting is relatively common in dogs after they overeat and is nothing to worry about in that instance, but in the case of separation anxiety, it should be taken seriously.

Not only is there a risk that your dog will eat their own vomit, making themselves sick all over again, but your dog will also be at risk of risk of dehydration. Of course, this also ignores the fact that your dog has grown so upset that they have vomited – that can’t be considered a good thing by any standards.

Even the calmest and sensible dog can become a nervous wreck if expected to sleep alone at night. Again, this depends entirely on your particular dog, and their personal experiences.

It can be tricky to conquer separation anxiety at night with a new dog, especially if they are not yet housetrained, but it’s very important. Having said this, bedtime routines may be the one occasion that you can cave into a dog’s demands for your company. It may be better for all concerned that way.

First thing’s first – you never really cure separation anxiety in dogs. Everything that we discussed in the previous section, What Causes Separation Anxiety in Dogs? will remain relevant throughout a canine lifespan, and your dog will never love being left alone.

Training is always the most impactful way of helping your dog overcome their fears of being left alone, and that is largely achieved by rewarding your dog every time you come home (thus sending the message that being left alone is not all bad!), and ensuring that your dog has enough entertainment to keep them occupied while you’re away.

Overall, however, the most important thing is to build a bond of trust with your canine companion. The only way a dog will ever break their separation anxiety is by eventually beginning to believe you when you say that you’ll be back soon!

That works too, by the way – dogs understand more than we give them credit for, so it never hurts to tell your dog where you’re going, why, and when you’ll be back. Don’t feel silly about doing this – it’s been suggested that people who speak to their pets are more intelligent.

Training is essential for putting a stop to dog separation anxiety. The sooner you do so, the sooner your dog will become more comfortable being left alone. If you’re looking for a fast response from Fido, take some time off work and concentrate on the task at hand.

Here is some advice on building trust and putting a stop to dog separation anxiety.

As separation anxiety is a psychological issue rather than a medical concern, there is not a specialist prescription medication that will cure it overnight. What may be worth investigating, however, is medication to help with general anxious behavior in a particularly skittish dog.

Speak to your vet before making a decision on this front, as every dog will have different needs based on their breed, temperament, size, weight, and symptoms. Medication should only really be a last resort; before taking this path, also trying picking up an anxiety vest (sometimes referred to as a thundershirt) from a pet store.

CBD may also have benefits for dogs with anxiety. Consult your vet to see if CBD might right for your dog.

An anxious dog can usually be calmed by pheromones, which are often available in the form of a diffuser from any reputable pet store.  Alternatively, you could pop a couple of drops of Rescue Remedy into Fido’s water bowl, or make your own herbal remedy for spraying around the house.

Popular herbs and oils for calming dogs are: 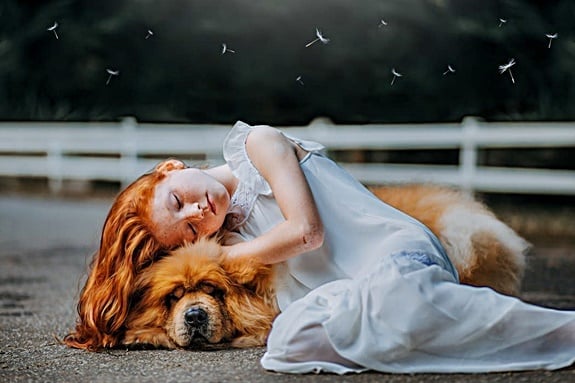 Alternatively, it’s believed that certain music is calming for dogs. It’s possible to source CDs and digital downloads that provide a soothing aural sensation, or some experts claim that calm, non-bombastic classical music does the trick. Try leaving some vintage tunes playing next time you pop out and see if your dog is nodding along and tapping their paw when you get home.