One of the best things about having a dog is being able to play with it and build a strong bond. Mental stimulation is vital to dog’s emotional and physical wellbeing too. It doesn’t matter whether you’re taking your dog to formal agility classes or playing fetch indoors on a miserable rainy day, the time you spend with your dog will bring you both so many rewards.

All dogs need mental stimulation as well as physical exercise. The amount and type of stimulation varies by age, breed and individual dog. Puppies should get no more than around 5 minutes of exercise for each month of life, adult dogs can take more.

What you play matters less than the quality of the attention you give your dog, and it doesn’t have to be expensive. Some of the ideas in this post use everyday things you’ll have at home. The most important thing is to make sure it’s fun for both of you by being patient and choosing games that suit your dog’s character and physical abilities.

Why bother with mental stimulation?

We all have days where we get busy and we wonder whether we really need to spend time playing with our dogs, giving them mental stimulation. We’ve walked them – do they really need more?

Spending time providing your dog with mental stimulation brings a number of benefits: 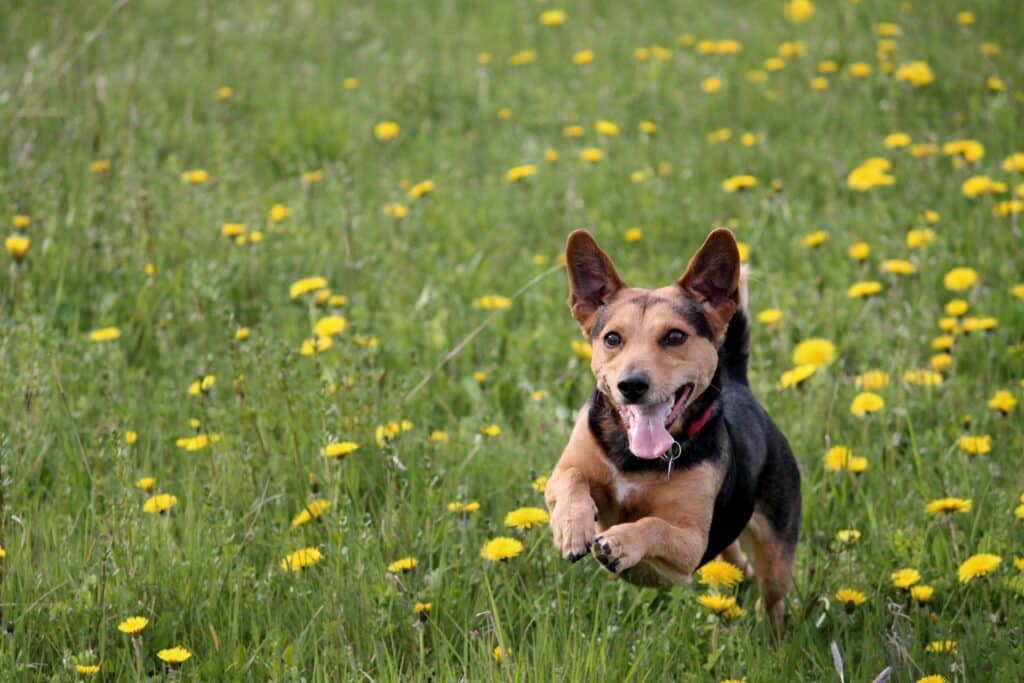 How to mentally stimulate your dog

There are a number of ways to engage your dog’s brain. We’ll go into each one in more detail, but in summary:

According to Marc Bekoff, author of Unleashing Your Dog: A Field Guide to Giving Your Canine Companion the Best Life Possible, “dogs live in, and are consumed by, a world of smells…when we walk dogs on a leash it’s almost like they are stopping to read a very interesting news headline or hear some important neighborhood gossip”.

How much attention does a dog need per day?

There is no single answer to this question. The amount of attention your dog needs depends on their breed and within that, on the individual dog. It also depends on their age; younger dogs tend to need more than older dogs.

I have two Salukis who are destructive at home when they’re bored. They need at least an hour a day playing and training with me, and entertaining themselves. That’s on top of the two one-hour runs they get each day.

Greyhounds, which are in the same sighthound family, are known to need much less physical and mental stimulation. It makes them great pets for many different kinds of people. A good wander around the block with plenty of sniffing twice a day, and they’re happy to spend the rest of their time on your couch. Even within greyhounds, though, some are higher energy.

Collies, on the other hand, need a lot of mental stimulation. They were selectively bred for their obedience and intelligence. They’re high-energy dogs and that intelligence means they need a lot of exercise and play to prevent them from developing obsessive behaviors, biting, barking, and possessiveness.

A note about small dogs. I often hear owners of smaller dog breeds like Yorkshire Terriers and Shi Tzu’s say that their dogs don’t need walks outside of their gardens. That may be true physically, but they miss out on an awful lot of the mental stimulation they need to keep their nervous behaviors and aggression at bay.

The best answer is to get to know what your dog needs through experience. If they’re destructive, listless, whining, barking incessantly, or generally not well settled, try playing with them more to see if that helps. Mix up the games and exercises to keep them from getting bored. 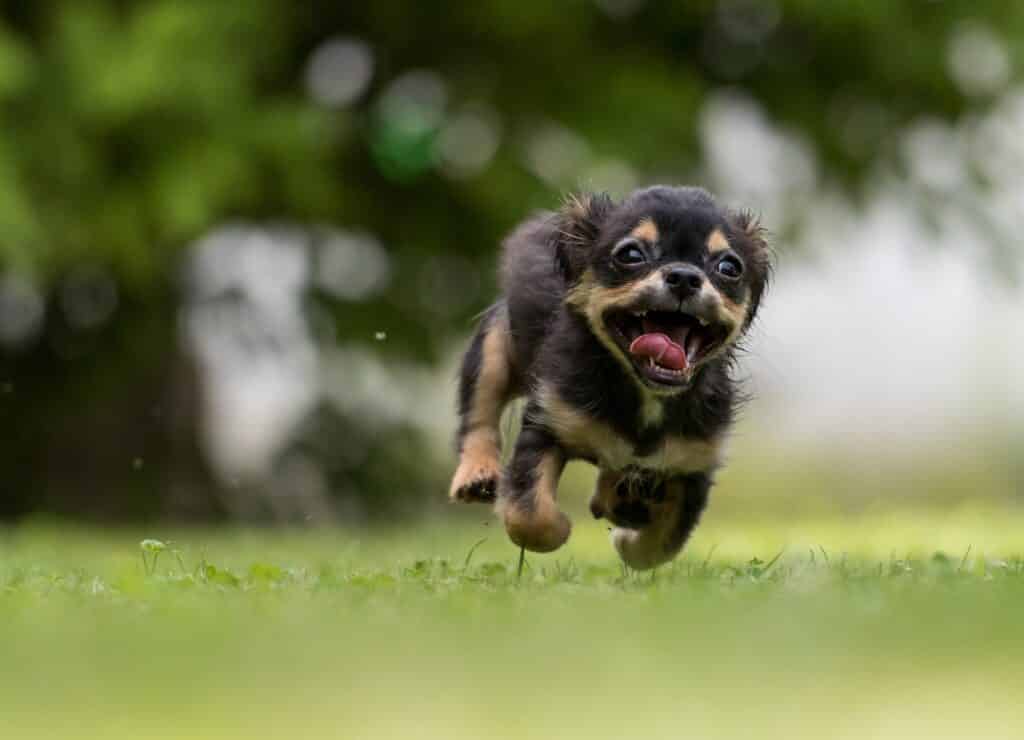 A note about playing with dogs

Remember that this is supposed to be fun for you and your dog. It’s easy to get frustrated because they’re not “getting it” fast enough but please don’t. If a game isn’t working, try a different one.

One of my boys has a very low frustration threshold and when he couldn’t work out how to get a shoebox lid off within 10 seconds, he just chewed the box until he got to the treats. He does better with things like agility or obedience training, which work his body as well as his mind, so that’s what we focus on.

Choose games that are right for your dog’s age, skill set and personality. There’s no point playing ball with a dog that doesn’t like to chase, and it’s more than it’s worth trying to do a complicated “dance” sequence with a dog who has a low boredom threshold.

Some games can be dangerous for puppies. Avoid games that require a lot of running for young puppies whose joints, ligaments, tendons and bones are easily damaged (the rule of thumb is 5 minutes of exercise for each month of the dog’s life). Early joint damage leads to early arthritis.

When your dog does solve the puzzle/find the treat/give a paw be lavish with your praise and rewards. Please don’t punish your dog for not learning, and don’t force them to do anything they’re not comfortable with. The more fun it is, the more they’ll want to play with you.

Problem-solving games are great for all dogs and there is such a variety: 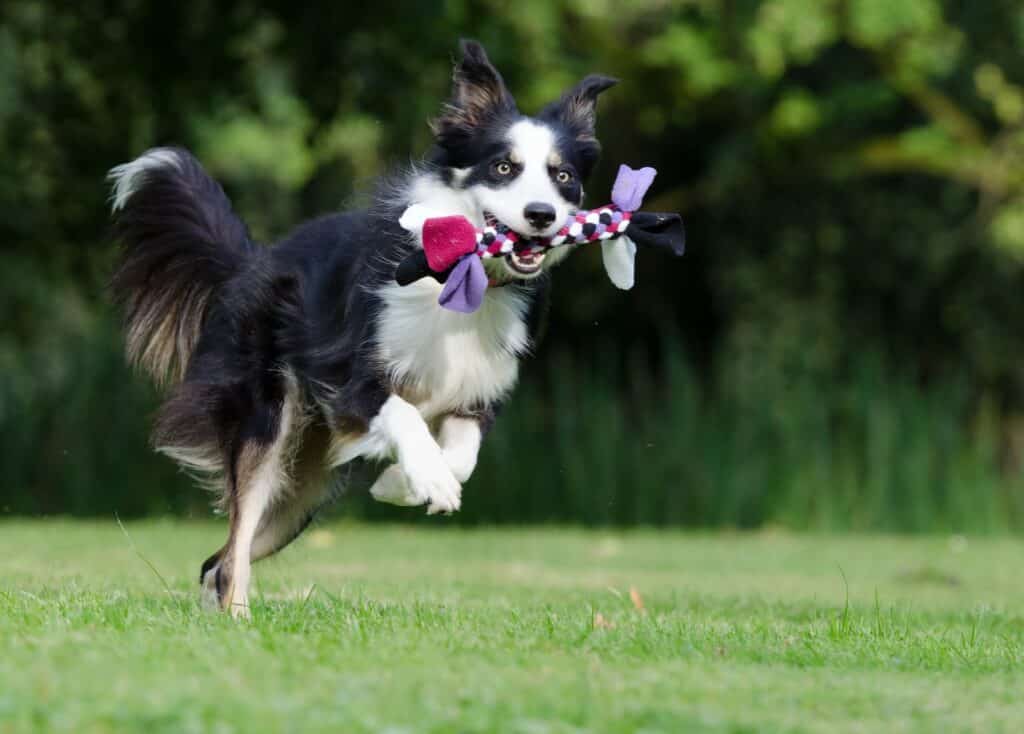 Five fun games to play with your dog inside

There are a lot of games you can play indoors as well as outside; most of the ones above can be done either way. Here are five great additional games to play when it’s pouring outside:

If you search for “heelwork to music” or “dog dance”, you’ll find some ideas on what to do. Just remember that not all dogs have the same ability, so start small and build on what they can (and want to) do. My dogs and I will never reach this level (starts at 2’24”), but we do some of the elements and have fun, which is the whole point.

Dog stimulation while you’re at work

As much as we don’t want to leave our dogs alone at home, most of us have to whether that’s to go to work or to run errands. There are things you can do to help your dog stay entertained.

Unless it’s very secure and not visible from sidewalks or roadsides, please don’t leave your dog alone in the garden. The number of dog thefts increases each year, and many of the stolen dogs are never recovered. 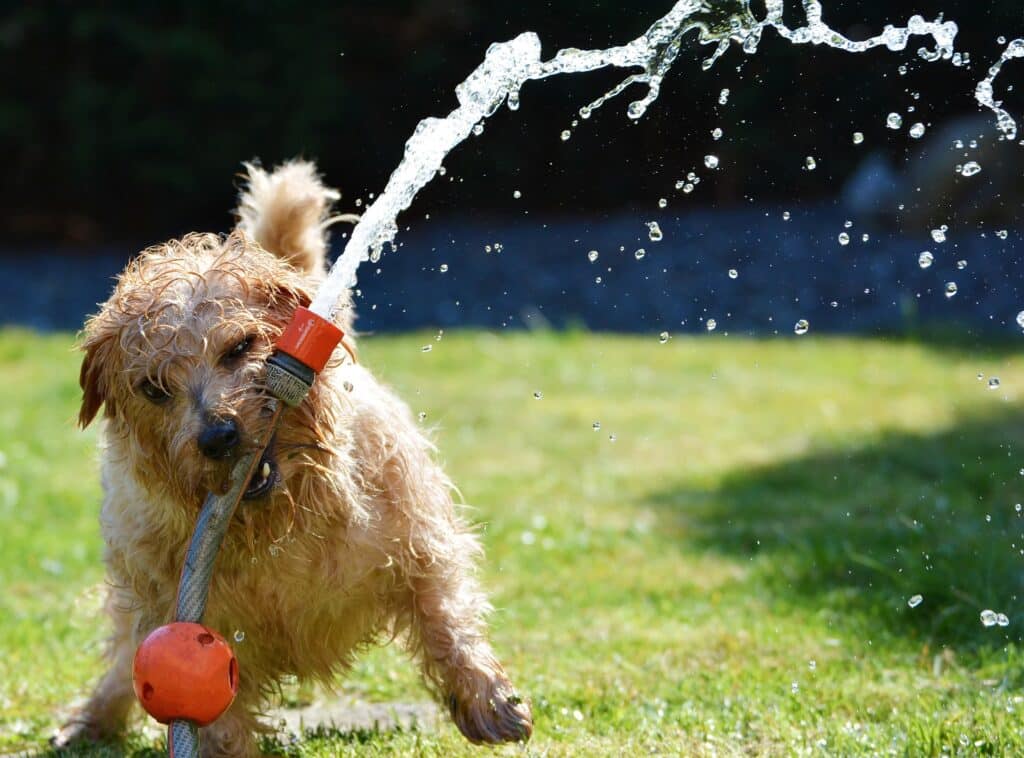 “Puppies are eager to learn and soak up information if it is presented with patience and in ways appropriate to their age and skill set”, says Mark Berkoff. With some adaptation, you can play a lot of the games above.

Puppies, like young children, have shorter attention spans so you might need to mix things up a little. They’re also likely to play for a shorter time than adult dogs, depending on their age.

Here are some games that are particularly well-suited for puppies:

Playing with your dog and offering it mental stimulation can be great fun for both of you, if you remember a few simple guidelines. Stick with things your dog enjoys for as long as they enjoy it. Keep it light and fun, and be patient with your dog.

Like people, they learn at different paces and have different boredom thresholds. Treat and praise often; make them feel like the champions that they are. You’ll be rewarded with a strong bond between you and a happier, healthier dog.