Walkies serve many purposes for dogs. On the one hand, it’s a chance to get out in nature, stretch their legs and enjoy all the wonderful, smells that the great outdoors has to offer a canine’s sensitive nose. Also, it’s an opportunity to empty their bladder.

Dogs can tell a great deal by sniffing the urine of their friends and neighbors. Think of dog pee as Canine Facebook – it shows your dog who has been where, and which local dogs have teamed up to form a pack.

This article will talk you through the science behind dog pee, and why your pet insists on continually urinating while on a walk. You may despair at times and wonder just how such a small dog could store so much urine in their bladder, but as you’re about to learn, there is a lot more to dog pee than meets the eye.

How Often Should a Dog Pee?

It depends on many factors, including their age (puppies and senior dogs tend to have more active bladders), their breed (larger dogs have bigger bladders than their toy equivalents, and thus will typically hold their water for longer), and your pet’s general lifestyle.

A golden rule is that a dog will produce up to 20ml of urine for every lb. of their body weight throughout the day that needs to be eliminated. That means the average canine will need to pee around four or five times per day.

That includes the traditional comfort breaks first thing in the morning and last thing at night, and again a handful of times during the day. If you allow your dog to pee every 4-6 hours, he or she should be comfortable.

However, halve those waiting times if you have a puppy or an older dog.

My Dog is Peeing a Lot More Than Usual – Are They Sick?

Not necessarily, but there could be a reason for this constant urination. Some dogs like to pee a lot to mark their territory, while others prefer to pee in short, sharp bursts rather than relieving their bladder in full in one go. It’s also possible that they have just consumed a great deal of water (though if you’re wondering why your dog is so thirsty, you may need to investigate the reason). 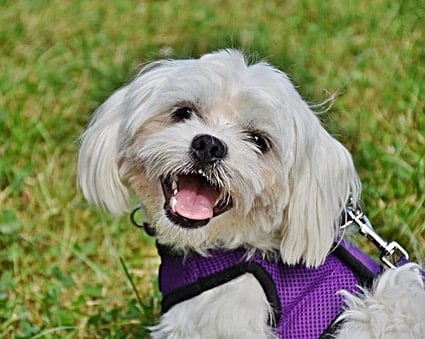 There could also be a health reason for your dog’s excessive peeing, though. Some of the common complaints that could result in a dog urinating constantly – aside from the side effects of medication for an entirely different problem – include:

If you’re worried about how much your dog is peeing, make an appointment with the vet – Care.com provide more information on when you need to start worrying, if at all. A healthcare professional will be able to run many tests to determine if your dog has a problem that needs to be resolved through medication or lifestyle changes.

Why Does a Dog Pee While Walking?

There is a multitude of reasons why a dog would pee while out on a walk.

Peeing while out on a walk is all part and parcel of being a dog, and it’s every bit as essential as the leg stretching exercise that also takes place during a stroll. Next time you’re out for a walk with your canine, remember that it’s primarily for their benefit – and as a result, allow them to stop for bathroom breaks with regularity. Every time a dog stops to pee, they’ll have a good reason for doing so, even if we can’t understand them from a human standpoint.

Should You Let Your Dog Mark on Walks?

Yes! It’s a hugely important part of canine behavior and socialization, and it should be encouraged as much as tolerated. It may be a little frustrating to have to stop when you’re in a hurry, but permit your dog to have a good sniff around and leave their mark wherever they want to (within reason!)

The only time you will have to be careful about allowing your dog to mark is if they are attempting to gain access to private property – somebody’s yard, for example, or a private field. 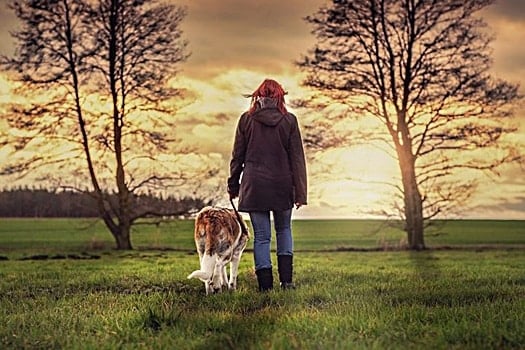 Your dog may smell a whole clean patch of grass that they could claim as their territory, but if you allow them to mark a private area, they’ll continually attempt to return and end up getting you in trouble.

It shouldn’t be a problem if your dog constantly pees in small quantities while out and about on a walk – provided the first urination was more substantial.

The way a dog’s bladder works is pretty simple. When they first reach a patch of grass or other areas that they like to relieve themselves, they’ll cock their leg or squat and empty the pressure that has built up on their bladder. That’s the equivalent or you or me visiting the bathroom – in theory, they have emptied the tank.

However, with a dog, they are more likely to hold a little back for marking as they walk. A dog will stop many times and attempt to release a little more urine to mark their territory and announce their presence. Your dog will do this continually until there is nothing left – and even that won’t prevent them from trying.

Of course, this all counts for nothing if your dog doesn’t release a substantial stream of urine when they first arrive on the scene. If they are only capable of peeing in small amounts that resemble marking, and especially if they are seemingly in pain while they try to eliminate, they are more than likely living with illness. Refer back to our segment on potential sickness that could cause your dog to pee regularly for more information.

My Dog is Picky About Where They Pee on a Walk

This is all part of the marking behavior that we have just discussed. If your dog is wandering around the park, seemingly considering stopping to pee and then changing their mind, it’s because another canine will have marked that spot.

The thought process may go something along the lines of, “I can’t go here, Rover has marked this spot, and I’m not part of his pack”, or “I’m not sure about this spot, it has an unfamiliar smell, and another dog may think that I am trying to dominate if I pee over them.”

Eventually, however, your dog will find somewhere comfortable. This will either be a unique and untouched area that your dog can claim for their own, or home to a friendly scent from a canine companion that encourages your dog to announce their presence.

My Older Dog Has Started Peeing While Walking

If your dog was previously not interested in scenting or marking but has taken to doing so, it could be because they are conscious of their aged status and are feeling a little threatened and insecure.

An older dog in the wild would be at risk of being challenged for alpha status but an ambitious younger pup, and your dog may be marking to signal that they are not a threat to other canines in the area, or that he or she is interested in forming a pack. 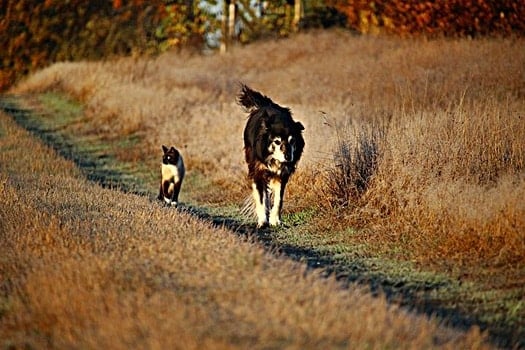 Sadly, there could also be a medical reason – as dogs get older, they start to struggle to maintain bladder control. If your older dog is happy to continue peeing outdoors while on a walk, however, allow them to do so – and encourage them to get everything out of their bladder while they’re out! It’s immeasurably better than accidents in the house.

My Dog is Dribbling Urine While Walking

If your dog appears to dribble urine involuntarily while out on a walk, they are most likely suffering from a urine infection, Get them to a vet as quickly as possible, as Fido will be in pain as a result of this problem, and a course of antibiotics will be required to get him back to his old self.

However, there could be other explanations for canine incontinence, especially if your dog is growing older and struggling to control their bladder. The good news is that, according to PetMD, up to 90% of older dogs that live with urinary incontinence can be successfully treated. This will be a huge relief both yourself and your pet. Your dog will be every bit as mortified at their inability to hold their water as you are sympathetic to their plight.

My Dog Keeps Trying to Pee on Other Dogs

Most of the time this is classic territorial behavior and a sign of your dog attempting to assert their dominance over another animal. Much like dogs like to leave their scent all over grass, lampposts, fire hydrants, mailboxes and anything else they can gain access to, they’ll do the same with a smaller, more submissive canine. It’s a behavior that is most commonly seen in unneutered males (all that testosterone has to go somewhere!), but it can be universal.

The Bark explains that a dog pees on another canine simply by accident. As we all know, dogs live the scent of each other’s urine and the chance to catch a fresh stream can be too tempting to pass up. Alas, that does mean that occasionally there will be casualties caught in the crossfire, and sometimes a dog will end up with an unwelcome shower.

There is a simple explanation for this – you have toilet trained your dog exceptionally well, and they are just being conscientious! The chances are that your dog sees the backyard as an extension of the house, and thus they don’t consider it to be a suitable location to pee. 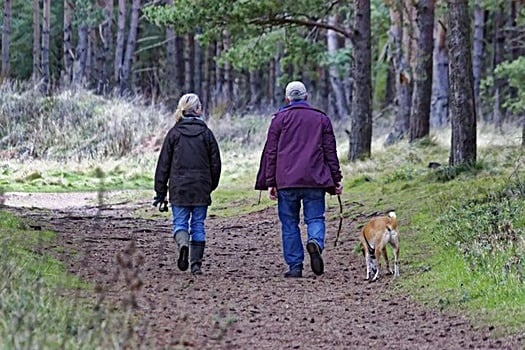 You could attempt to re-train your dog to use the lawn as a bathroom, but bear in mind that it might confuse your pooch – they could be left wondering if they’re supposed to pee in the house or not.

My Dog Always Wants to Pee in the Night

If your dog keeps waking you up at antisocial hours of the night and demanding a walk and a pee, there is something afoot. Assuming that you have taken your dog out for a final bathroom break the last thing at night before they start to sleep, consider the following as potential explanations for their nocturnal urination:

Sometimes dogs need to pee in the middle of the night. It’s inconvenient, but it’s no different to when we as humans need to fumble our way to the bathroom in the dark. However, if it’s happening with alarming regularity, follow some of the steps above or consult a vet. You’d speak to a doctor if you were struggling to make it through the night yourself, and the same rules should always apply to a dog. Nobody enjoys having their beauty sleep disturbed!

Unless you have any reason to be fearful about your dog’s health, there is no need to worry about the fact that they stop and continuously pee while you’re out on a walk. It should be positively encouraged as part of canine behavior as it’s mostly a social activity.

As long as your dog is not trespassing onto private property or struggling to control their bladder, you should take your pet out for several strolls during the day. It’ll minimize the risk of your dog needing to pee at an antisocial hour of the day or night, and keep Fido’s tail wagging as he gets the opportunity to catch up on the canine news of the day – plus its great exercise for you. Everybody wins.