Watching a dog chase his or her tail around in a circle can be very amusing. Everybody loves watching a playful dog, and the sheer joy that they derive from unsuccessfully attempting to capture this appendage is the embodiment of innocent glee.

Is there a dark side to this behavior, though? Does a dog chase its tail in a futile attempt at scratching a mental itch demonstrating that they’re in anguish? Or, you know, do they think it’s enjoyable to do?

This guide will take a look at why dogs chase their tails, including if and when you should be concerned about this behavior. We’ll also discuss how to stop your dog from chasing its tail – and any other playful habits that could quickly take a turn for the worse.

Is a Dog Chasing Their Tail Mental Illness?

It can be, in rare cases, but more often not there is a perfectly reasonable explanation for your dog being determined to chase their tail. You only really need to start worrying if your pet is showing signs of addiction and obsession. If your dog chooses to pursue its tail over any other activity, then forgoing the opportunity to eat, play or chase a ball, you may have a problem on your hands.

Obsessive Compulsive Disorder in dogs is not a direct concern, but our pets can grow obsessed with particular patterns of behavior. This could explain why your dog is so determined. Be aware that the acronym OCD does not apply to Obsessive Compulsive Disorder in dogs but rather Osteochondritis Dissecans, a condition in which larger dogs find their cartilage beginning to break or crack.

Compulsive behaviors usually arise because your dog is attempting to soothe sensations of anxiety or frustration. If your dog is worried, frightened or in physical pain, they’ll look to relieve that in whichever way they can. This could explain why your dog is licking or chewing on their feet, or indeed chase their tail. If chasing their tail calms their heart rate down, your dog will correlate that with feeling better – and this means that they’ll start performing the same action time and again, whenever they are feeling apprehensive.

This means that a dog engaging in compulsive tail chasing is not necessarily mentally ill, but they may have their reasons for doing so. Before you worry about your dog’s emotional health, you should ensure that their desire to chase their tail cannot be traced back to others reasons. If you’re adamant that the problem lies within your dog’s mind, there’s also no reason to panic. An animal behaviorist will be able to coach them out of this mentality, but even if they can’t a vet will prescribe medication.

Are There Other Reasons Why a Dog Chases Its Tail?

In addition to anxiety and stress, there could be many reasons why a dog chases their tail.

These include the following reasons: 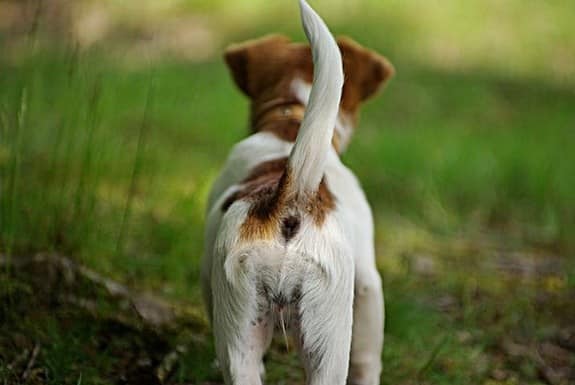 As you will see, there are a wide variety of possible reasons why your dog may be chasing their tail, and very few of them require the intervention of a professional. You could exhaust any number of possible explanations before any suggestion of a psychological disorder becomes likely – or even conceivable.

Certain breeds of dog are more genetically disposed to chasing their tails than others, so this may go some way to explaining why your pet indulges in such behavior.

Just some of the dog breeds include:

The explanations for this are relatively simple – these are all high-energy dog breeds with hunting instincts. This makes it hardly surprising that such animals will be looking to burn off their excess energy by chasing their rear appendages.

My Puppy Keeps Chasing Its Tail

This is perfectly normal, and nothing worry about. Young puppies love to play, which is one of the many things that we adore about them. As a puppy is typically surrounded by toys 24/7, they assume that their tail is yet another example of this – especially if they’re an ‘only dog,’ and are not surrounded by fellow pups with tails of their own.

Every time your puppy turns their head, they’ll catch a tempting, wagging tail from the corner of their eye and their hunting instincts will kick in and start driving Fido wild. As your pup’s brain is still immature, they won’t put two and two together and realize that what they’re tracking is attached to their own body, and they’ll give rapid chase.

Usually, your puppy will lose interest soon enough when something else shows up to occupy their time, so there’s no need to call the vet on sight. It will only be a cause for concern if your puppy grows up to become an adult dog that remains dedicated to the thrill of the chase.

If an older dog starts to chase and suck on their tail seemingly out of the blue, the chances are they are trying to tell you something. Take your dog to an animal healthcare specialist if you’re concerned about this new development in their behavior, and ensure that it doesn’t have any roots in a major health concern.

One particular health concern that often bothers older dogs is Idiopathic Vestibular Syndrome, which can lead to Labyrinthitis. This condition begins in the ear and causes a dog to lose their sense of balance, as well as cause tics in their vision. This, in turn, may encourage your dog to start chasing their tail as they keep spotting something from the corner of their eye thanks to involuntary eye movements. 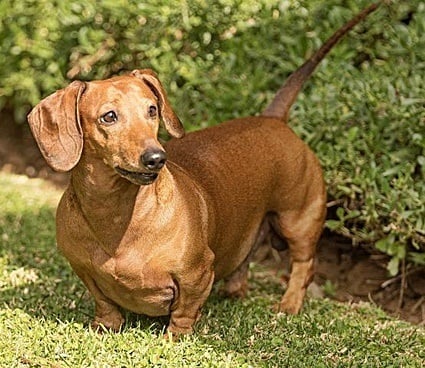 Don’t waste any time getting your senior dog to a vet if they start chasing their tail and you think that it’s strange, especially if they are also displaying other signs of sickness. While canines tend to get a little quirkier as they approach their advancing years, it’s always better to be safe than sorry.

My Dog is Chasing Their Tail and Crying

These are most likely tears of frustration – your dog is attempting to capture their tail so they can relieve itchiness and other discomforts, and are unable to reach the spot that is causing them the most problems.

Listen carefully the next time your dog does this, and compare it to how your dog usually sounds. Much like cats have evolved to use a particular meow that is exclusively for human ears, your dog has probably developed its whining noise that they know gets a result. This is your dog exclaiming, “human, I require your assistance at once.”

If your dog is exhibiting any of these behaviors, give their tail and back end a good scratch and groom – keeping a very close eye open for any sign of fleas, as these may be the cause of Fido’s frustration.

My Dog Chases Its Tail and Growls

Don’t worry about this, your dog isn’t racked with self-loathing and taking to threatening themselves. Growling is all a natural part of a dog’s play, and it’s often an involuntary reaction on behalf of a canine.

As long as the growling and grunting aren’t accompanied by any other form of aggressive behavior (whether that’s toward yourself or another dog), ignore it and allow your pet to enjoy themselves.

How to Encourage a Dog to Stop Chasing Their Tail

There is a multitude of ways to prevent a dog from chasing their tail without picking up the phone and making a vet’s appointment.

Some of the possible methods include: 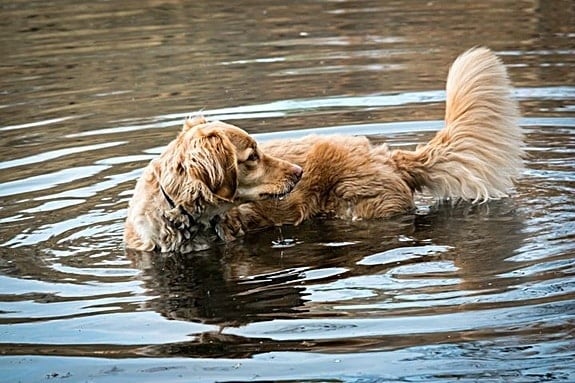 If none of this does the trick, maybe it’s time to call in professional help. This could be an animal psychologist that takes CBT to the next level, or medication provided by a vet to curb your dog’s anxiety and compulsions.

Should I Dock My Dog’s Tail to Stop Them Chasing it?

If your dog’s tail was not docked almost immediately after they were born, they most certainly should not be subjected to it later in their life. Even then, it’s debatable whether it’s appropriate to dock a puppy’s tail. The practice is outlawed in a great many countries.

People dock their pet’s tails for a multitude of reasons. These include hygiene so a dog’s tail can’t drag on the ground or into their waste; rabies prevention; preventing injury while performing a job; increasing strength or speed; even just aesthetic preference.

Bobbing a dog’s tail to stop them chasing it is like cutting off a child’s hand to prevent them from biting their fingernails.

Other Playful Behaviors in Dogs to Look Out For

Chasing a tail isn’t the only canine behavior to keep an eye out for, lest it becomes something that you’d prefer to avoid in the future.

Other play styles that you may need to observe include: 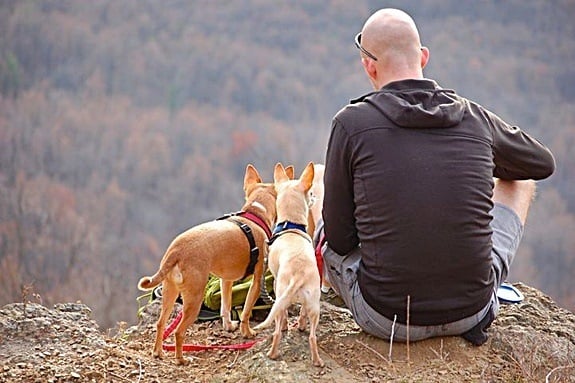 Most dogs will work things out for themselves, and if you socialize your pet appropriately through puppy parties and visits with friends and family, they will be able to pick up their cues from older canines that speak the same language. Teenage hounds are ideal for this, as they’ll be experienced enough to teach your puppy the ropes without being too old and tetchy to tolerate any exuberance.

Remember, for some dogs any attention is good attention, so it’s counter-productive to tell them off for acting in a way that you consider undesirable! However, sometimes you’ll need to step in to ensure that a curious activity doesn’t become a habit. Reinforcing and rewarding calm behavior and ignoring anything that you’re not fond of is usually the way to go.

Chasing his or her tail may not be something that you want your dog to make a habit of, but there are worse behaviors and habits that they can indulge in. Provided it remains within the realms of play there is no reason why you should interfere. After all, part of the pleasure of living with a canine companion is the goofy shenanigans they get up to. Just sit back, relax, and let your dog entertain you through their boundless enthusiasm for the simple things in life! You can probably learn a little something from them in the process.