Many pet owners find themselves freaked out by their pet’s ability to doze during the day with their eyes open. Surely even the most vigilant watchdog will not find that to be a peaceful and restful way to sleep.

The anatomy of a dog’s eye is different from that of a human, and our canine companions have a very thin third eyelid that’s designed to prevent their eyes from drying out. You wouldn’t know that unless you were really looking, though, as it’s so slender that it’s almost invisible to the naked eye.

Is My Dog Asleep if Their Eyes are Open?

If a dog’s eyes are open, then they won’t be asleep. A dog will not be able to doze off without blocking natural light with their eyelids any more successfully than a human. Just like us, dogs need to sleep and dream to stay healthy and well-adjusted.

This ‘third eyelid’ is called the nicitating membrane (also known as the haw). The purpose of this addition to the canine anatomy is to help a dog generate moisture in their eyes while they’re asleep, as they usually do this by blinking. It works in tandem with the nictitans gland to produce tears, and keep the eyes from drying out.

Why Do Dogs Have a Nicitating Membrane?

Dogs have this membrane as a result of evolutionary necessity. As we know, our pets are prone to getting all kinds of foreign objects in their eyes – whether that’s because they ride in cars with their heads out of the window, they allow themselves to be poked in the eye by twigs and sticks while investigating bushes and hedgerows on a walk. Once this happens, a dog isn’t able to rub their eye and clear it out, so the nicitating membrane does the work for them.

Of course, another reason is defense and protection. Dogs may now be domesticated, but they’re still wild animals at heart – and that means that will be hardwired to guard themselves against predators. Only the strongest and most foolhardy animal would tackle a dog that appears to be awake, so snoozing canines developed the ability to trick opponents into steering clear.

I Can See the Nicitating Membrane When My Dog is Awake

That’s not a good sign – it means that your dog has developed a condition called Cherry Eye. As Dogster explains, this means that the nicitating membrane has prolapsed.

It’s not a life-threatening health issue but it will be uncomfortable for your dog and could have longer-term ramifications if left untreated. If you notice that your dog has uncharacteristically red eyes, you should make an appointment with the vet to get it rectified.

What Dog Breeds Sleep With Their Eyes Open?

As we have established, none of them. However, some breeds of dog are more likely to have a prominent nicitating membrane than others.

This condition (haw eyes) is more likely to impact upon breeds with short muzzles, or those that are tiny, such as toy breeds.

If your dog falls under any of these breeds, be particularly vigilant about keeping your eye on their eyes: 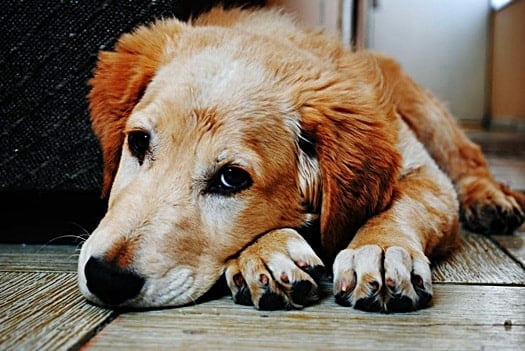 If your dog breed is not listed above, that’s no reason to get complacent. Any dog can get cherry eye, and all dogs have the nicitating membrane. Puppies younger than two years of age are more likely to be struck down with the condition than healthy adult dogs, but it could impact upon a dog at any time.

Remember not to take any chances – if your dog should not have the kind of red, bloodshot eyes that we associate with a regretful Sunday morning that follows a memorable Saturday night! Such a look suggests that your dog is in some discomfort, even if they are not verbalizing it, and you should get them professional help ASAP.

Why Does My Dog Snore With Its Eyes Open?

As we now know, a dog’s “third eyelid” means it can sleep perfectly well with its other eyelids open. That means it can exhibit all the normal sleep behaviors despite seemingly being awake – including snoring! It looks (and sounds) weird, but it’s totally normal.

My Old Dog is Sleeping with His Eyes Open

There is nothing to worry about if an older dog has started to exhibit this behavior, even if they have never done so before – the cause remains the same. Your senior dog will still be sound asleep behind the nicitating membrane, and their quality of life will not be impacted in any way if they’re otherwise healthy.

However, it may be worth checking your older dogs eyes to ensure they are generating enough moisture. Just like humans, an older dog will find that various processes within their body that they previously took for granted start to slow down and even stop.

If your pet appears to have dry eyes and nature needs a little helping hand, there are many dog-safe moisturizing eye drops available for purchase in any reputable pet store. Apply them liberally to ensure that your dog doesn’t end up with any ongoing ocular problems.

My Dog Is Sleeping With His Eyes Open After Surgery

It’s possible that your dog is being more vigilant after surgery as a result of feeling unsettled, so he sleeps with his eyes open when he doesn’t usually. Or it could just be that you’re watching your dog sleep more closely because you’re worried post-surgery, so you’re noticing this habit for the first time. Either way, it’s nothing to worry about.

Can a Dog Sleep With One Eye Open?

Nope – the same rules apply to just one as do to both. The cold, hard fact is that if your dog is asleep, both their eyes are closed – what you are seeing is, once again, the nicitating membrane.

The reason for the appearance of sleeping with one eye open is an extension of the defense mechanism that we have previously discussed. If a dog is not entirely comfortable and 100% trusting of the people that will be sleeping in the same space as them, they may seek to give the impression of watching everything that is going on around them.

Should I Train My Dog to Sleep With Their Eyes Fully Closed?

There is no need, and you probably wouldn’t have much success anyway. This is an instinctive behavior, and it doesn’t do your pet any harm, so if they’re happy to doze in such a manner then let sleeping dogs lie.

How Can I Tell if My Dog is Awake or Asleep?

One of the issues with a dog seeming to sleep with their eyes open is that it may be difficult to tell if your pet is awake or dozing.

Look out for some of these signs to confirm that they are sleeping:

Keep an eye on your dog while they’re lying still, and get an idea of whether they’re awake or dozing. If you have reason to suspect that your pet is exhibiting all the symptoms of sleeping but it just lounging around more than usual, consider having them seen by a vet. It’s possible for dogs to develop depression, and lethargy is also a symptom of many health concerns.

My Dog Sleeps with Its Eyes Open and Twitches

One thing that you will need to be vigilant about is twitching during sleep, especially if they roll their eyes back as they do so. It’s most likely that they are dreaming (more on that in a moment), but it’s possible that your dog is having a seizure.

If you suspect this, don’t panic. Don’t wake your dog, and don’t put your hands in their mouth to prevent them from swallowing their tongue. This is not a danger, and you’ll end up getting bitten. Just stay with your dog and make sure they do not roll over and hurt themselves and wrap them in a fresh, damp towel if the seizure lasts more than three minutes as they may otherwise overheat.

In the event of a dog seizure, make an appointment with a vet – there could be any number of explanations. If it’s safe to do so, you should consider filming the event too. If you can show a professional what happened, they may be able to identify the cause sooner.

So, we now know that your dog isn’t sleeping with their eyes open. They are, however, sleeping? Why are they twitching and making noise?

The most likely answer is that your dog is dreaming. As the American Kennel Club explains, dogs are also prone to dreaming, though naturally, we can’t be sure about what those midnight movies may entail.

We like to imagine that your dog is having a great time dreaming about chasing a squirrel wrapped in bacon, but some scientists believe that dog dreams are replays of the events of the day. 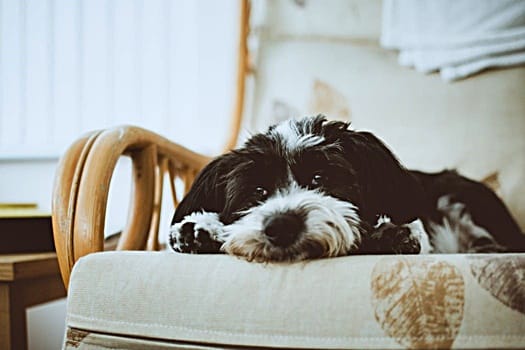 Whatever events are unfolding in the canine subconscious, the signs that your dog is dreaming are:

Sadly, dogs are just as capable of having nightmares as they are dreams. If you are worried that your pet is being tortured by their sleeping subconscious, consider giving them a very gentle stroke on the back – you’ll often find that this quickly soothes them.

This will, however, leave you at risk of a bite or scratch if you jerk them awake unexpectedly so you could consider attempting to make a loud noise to rouse them instead! If your dog looks peaceful, however, try to avoid waking them up.

In the purest sense of the word that we associate with humans – namely, getting up and wandering around while conducting basic, practical tasks while snoring – no. The closest that a dog will typically come to sleepwalking is seeming to run or swim on the spot while laying on their back or side, presumably as a result of their REM sleep.

However, canines do have a handful of behaviors that could be mistaken for sleepwalking.

The most common explanation would be a dog dreaming about running and chasing a prey animal, then suddenly waking up. Instinct may kick in on such as occasion, and they’ll immediately flip onto their four paws and pick up in their waking life where their dream selves left off.

If they keep their eyelids closed while they come around and you’re watching your pet potter around with just the nicitating membrane visible, it will look even more like they’re sleepwalking.

Sadly, there could be something more severe that explains your dog’s behavior. It can be hard to spot such a problem, and you can’t be expected to call a vet every time your dog does something out of the ordinary, or you’d never have time to get any work done.

However, if your dog is worrying you by undertaking sudden and unexplainable changes in their routine, especially at night, consider getting them checked out with a scan or x-ray. It’s always better to be safe than sorry.

Some may consider the fact that dogs do not sleep with their eyes open to be a little disappointing. Not only does it mean that many Saturday morning cartoons from our childhoods have lied to us, but it’s also a fantastic party trick that we can now see the science behind.

Despite this, it’s a relief – given that the average dog needs around 12 hours of sleep per day, keeping their eyes open that long could put a severe dent in their nap schedule.

Remember that the next time your pet is snoring contentedly, as well as stirring and twitching, but seeming to stare right at you. Leave your dog to their rest, as there is nothing sinister afoot.