Depending on what breed, you’ll notice between eight to ten nipples on your dog, and they will serve similar purposes to those of a human. When a female dog has pups, her nipples will automatically begin to secrete milk in order to keep her babies well nourished. On a male dog, they are basically just decoration.

That’s right, male dogs do have nipples, even if you can’t see them at first. The fact is, male dogs – especially those with longer fur coats – tend not to display their nipples loud and proud as they do not serve a health or reproductive purpose.

In fact, if your male dog appears to be leaking milk or any other kind of fluid from their nipples, it’s time to make an appointment with the vet – they are seemingly undergoing a health crisis! If they seem content, however, you should leave your dog alone. Their nipples are entirely neutral, achieving nothing but doing no harm either.

This article will dig a little deeper into canine biology and the purpose of nipples on dogs – both male and female – as well as the other differences in canine anatomy between the genders.

The short answer is, “the same as human nipples” – canine equivalents are not shaped like stars or anything. You’ll find them dotted from the groin to the top of the belly, and they will be small, round and usually pink or red– though in some cases, a dog’s nipples may be identical in color to their skin, or even jet black.

A dog’s nipples will usually be laid out in two batches on their tummy, and nine times out of then they will be symmetrical and even in number. However, in some cases, a dog’s nipples end up elsewhere in their body.

This is because nipples are generated along the placenta line while the puppy is in utero, and sometimes they end up in a rogue place. If you find a lump on your dog’s leg, for example, check the other leg before you freak out – it may be a strangely located nipple.

In some instances, a canine nipple will be more prominent and swollen. If you have a bitch, for example, and she is on heat, her nipples will be considerably more noticeable. The same also applies to a female dog that is nursing puppies. If a dog’s nipples are not needed, however, they will often be barely noticeable. It’s very much a case of out of use, out of sight, out of mind.

How Many Nipples Should a Dog Have?

This depends on the breed of dog, but typically no fewer than six, and no more than ten. Gender will not make any difference to the number of nipples on a dog.

Why do dogs need so many nipples? Well, the answer to that is simple – to feed their young. All mammals have nipples because of this reason, to help their babies latch on and take nourishing milk in their early, wholly dependent first days.

Your dog has multiple nipples so that she can feed as many of her pups – hopefully, the entire litter – as soon as they are born, as very young dogs are extremely vulnerable and will not survive for long at all without their mother’s milk.

This is why the number of nipples is breed-dependent; those that are genetically predisposed to giving birth to larger litters will have more nipples in order to keep them all nourished. Conversely, this is also why humans have just two nipples – aside from in rare cases of multiple births, a human mother will often be simultaneously nursing two children at most. 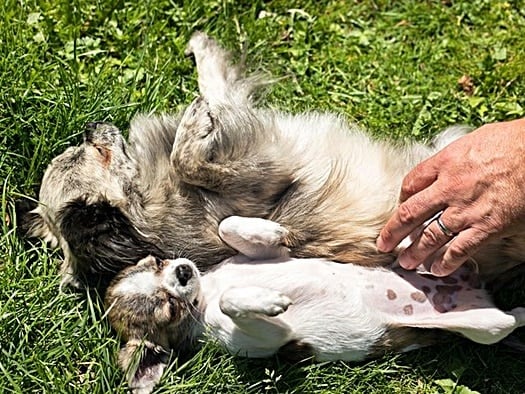 As an interesting aside, forget anything that you have heard about canine dominance creating a ‘pecking order’ of feeding, and some dogs staking a claim on a particular nipple. As per a study published in the Journal of Comparative Psychology, puppies will latch onto the first source of food they can find. Alpha behaviors are learned later in life – these early days are just about survival.

What Else Are Dog Nipples Used For?

So, aside from feeding a hungry puppy, do dog nipples have any other uses?

Not really – aside from helping us as pet owners to identify if our dog is feeling under the weather, or growing particularly sick.

We will discuss the many illnesses that could infect a canine nipple in greater detail later, but it pays to regularly check and assess these parts of the body. If you are used to not seeing your dog’s nipples and suddenly they appear to be prominent, it may be worth examination by a vet.

Do Male Dogs Have Mammary Glands?

Technically, yes. As Scientific American explains, regardless of their gender, a dog’s nipples are modified sweat glands. It’s just that a female dog will release milk rather than perspiration. They will not use them for the traditional purpose, however. A male canine will not be able to nourish their young through breastfeeding.

So, if a male dog doesn’t need to nurse their young, why do they have nipples at all? It’s a worthy question, and as the American Kennel Club explains, the answer is the same as why human males have them.

When a puppy’s fetus is created and the little fur baby starts their journey from bump on your dog’s tummy to the bouncing, yelping, chewing bundle of fun that we know and love, they have no gender – they are just are.

Nipples are a default part of all mammal anatomy, and even they serve no purpose for a male, they also do no harm. With that in mind, evolution has never seen fit to turn male mammals into walking, talking (or barking, or howling, or meowing) Ken dolls.

Why Does My Male Dog Not Have Nipples?

They do – you can’t see them with your naked eye. Sometimes dog nipples do not swell and rise to the surface of their body unless they are going to be required, and as a male dog would not produce any milk for hungry puppies, there is no need for their nipples to be visible.

Next time your male dog is laying on his back and requesting a tummy rub, really get in there and pay attention to what you’re touching. Sooner or later you’ll find your fingers rubbing small, bumpy pieces of flesh that almost resemble moles of hives. Don’t panic as there is no need to summon the vet; you have just located their nipples.

My Female Dog Doesn’t Seem to Have Any Nipples

See above – female dogs, just like males, may find their nipples retreating if not in use. If your bitch has been spayed, you will find that her nipples are particularly discreet to the eye as they will serve no useful purpose.

However, if your female dog is ‘intact’ and you cannot locate her nipples, it may be worth seeking the advice of a vet as a precaution. As we have discussed, if your dog finds herself pregnant her litter of pups will be wholly reliant on locating her nipples and feeding on the teat. If there is a problem to deal with, it’s better to do so in advance.

How Can I Tell the Difference Between a Dog’s Nipple and a Tick?

Something that all pooch parents need to be careful of is the fact that a tick that has attached itself to a dog’s underbelly can sometimes resemble a nipple. They’re both lumpy and bumpy, they will likely be in the same place on the body, and if the tick has been feeding they’ll probably be the same color as the bug’s body will be bloated with blood.

Look out for these telltale signs of a tick on your dog, and ensure that you don’t make a very painful mistake:

Of course, it’s always considerably easier to not let a tick attach itself to your dog in the first place. Still make sure that you are on top of the preventative treatments that will protect your pet from unwelcome parasites, and be vigilant about checking for any signs of infestation. If a tick does sink their teeth into your canine, they are at risk of many health concerns – as well as the discomfort of being snacked upon.

Can a Dog Develop Breast Cancer?

Sadly, yes. Dogs are just as susceptible to tumors in their mammary glands as humans.

A mammary tumor is canine breast cancer by another name, and will be identified by the following symptoms: 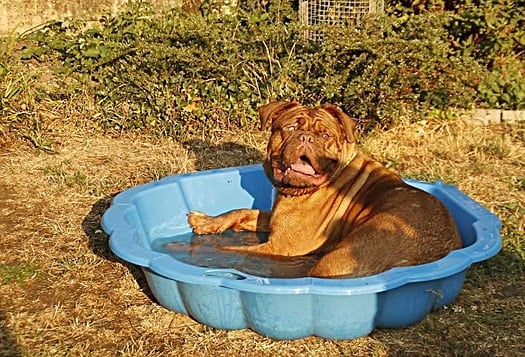 If you suspect that your dog has a mammary tumor, seek professional help from a vet ASAP. Just like with human cancers, if the problem is caught early enough the chances for recovery are far greater. Having said that, there is some good news; only 50% of mammary tumors are actively dangerous, and even then they are frequently not fatal. Be aware that surgery will be needed to remove the tumor, though; make sure your insurance policy is up to date!

On paper, any female dog could be struck down by a mammary tumor, but some are more in danger than others. Spaniels, dachshunds, and poodles are the breeds most at risk while getting your dog spayed before they enter heat for the first time will make it hugely unlikely that they will suffer later in life.

Yes, one other major problem – a bacterial infection called mastitis, which could impact on dogs of all ages and genders. However, as with mammary tumors, it will be an intact female dog that is most likely to struggle with the condition.

If your dog has mastitis their nipples will leak pus, and they’ll generally be under the weather – failing to move with any kind of gusto, and neglecting to engage in any of their usual activities. It is a common problem with dogs that have recently given birth, which is dangerous for both mother and pups; the babies will starve as they will be unable to feed on your dog’s teats, and mastitis can send a dog into shock and kill them if left untreated.

If you have any suspicion at all that your dog has mastitis, get them to a vet for immediate treatment. If you capture the problem early enough all that will be required to treat it is a course of antibiotics, though if the infection has grown your dog may need to stay overnight and receive intravenous fluids to regain their strength and health.

Nipples on males are often a source of curiosity, as they appear to serve no real purpose. Dogs are no different in this instance, and a male canine will not display any behaviors linked to their nipples unless they are unwell. You are free to ignore this part of your dog’s anatomy unless you have a reason to be concerned about their health.