Dogs seem to have an irrepressible urge to lick everything. Whether that’s licking their owner, licking other dogs, or even licking strangers, it’s difficult to get them to stop.

If you need to get them to stop, behavior training or dog chew deterrent sprays are good options. But it’s a natural and common behavior, so it’s difficult to prevent it from happening.

What Does It Mean When a Dog Licks You?

Licking is a vital gesture between dogs, and begins early in life. The bitch will lick her puppies clean as soon as she gives birth. From then on, both the mother and her pups will lick each other in a variety of circumstances.

However, it’s crucial not to humanize dogs’ behavior and say that licking is analogous to kissing. It isn’t. Instead, it serves a multitude of purposes—showing affection included. Here’s a brief list:

The exact meaning of a lick changes depending on the circumstance. Below is a list of different circumstances in which your dog might choose to lick you.

What Is a Dog Saying When They Lick You for a Long Time?

They may be showing affection through grooming you. Dogs in the same pack regularly lick each other to keep one another clean. They may be doing the same when licking people.

Or, your dog could be tasting your skin. You may have gone to a new place, and your skin doesn’t taste how they expect. Licking and sniffing you is a way of figuring out where you’ve been.

They could also be licking you because you taste of salt. If you have been sweating all day, they may be cleaning you while enjoying the taste of your salty skin.

Licking may also release endorphins in the dog’s brain. This could creating a self-reinforcing behavioral pattern.

Your dog will only lick you for a long time if you allow them to. The more you react positively, the more the dog will think that you want them to lick you. They could go on until they get bored, so it’s better not to react at all.

Why Does My Dog Lick My Face When I Lay Down?

The precise meaning of the dog licking your face depends on the context. As such, you’ll have to figure out which of the following reasons sounds the most likely.

Fully-grown dogs lick one another in order to groom. Licking another dog, and allowing another dog to lick you, is an expression of trust. Your dog may be showing affection for you.

By extension, pack animals groom the leader to show that they are subservient. Your dog could be showing subservience by licking your face, i.e., establishing pack social hierarchy. When you lie down, your face is within reach of their licks, but licking anywhere else means the same thing.

Why Does My Dog Lick My Wounds?

Dogs lick wounds as an instinctual behavior. If they are hurt, they will lick their wounds. The purpose of doing so is to clean the wound. While dog saliva is far from bacteria-free, the dog is ensuring that the wound is free from:

On balance, it’s preferable for the wound to become slightly infected than it is for it to have a foreign object stuck in it. And in the case of mud or dirt, there is less bacteria in the saliva anyway.

Dogs lick your wounds as an extension of this behavior. It is their attempt to clean your wound and stop it from festering. This is basic pack behavior, where members of the pack take care of one another to ensure that the pack remains strong.

While it is affectionate behavior, don’t allow your dog to lick your wounds. Their saliva is full of bacteria that may cause an infection. Show your dog that you accept their affection, before cleaning and dressing the wound properly.

Why Do Dogs Lick Your Ears?

Your ears experience natural wax build-up. As disgusting an idea as it is, your dog may be licking your ears to taste your earwax.

Also, ears are fun to lick. Your ears flick back into place when you bend or move them. Your dog may be playing with your ears like an interactive toy. Your response—usually to laugh and smile—is a positive one, which further reinforces the behavior.

Or, they could be licking your ears for the same reasons as they lick anywhere else. It may be that your ears are the most accessible place for them to lick.

However, you shouldn’t let your dog continually lick your ears. According to The Lancet, a patient experienced continued ear infections—complete with pus—after their dog licked their ear. They even developed meningitis.

The paper theorized that this might have occurred as the patient had a ruptured eardrum. So, if you have consistent ear infections, your dog licking your ears may be the cause.

Why Do Dogs Lick You When You Rub Their Belly?

Your dog will lick you when you rub their belly because they want to interact with you. You are showing them affection, and they are showing you affection back.

This behavior, again, has its roots in natural instinct. To reinforce the social bonds of the pack, wild dogs and wolves will groom each other. This may be reciprocal, i.e., wolves grooming each other at the same time. Your dog licking you may be their ‘response’, in a way.

My Dog Keeps Licking My Other Dog

If your dogs keep licking each other, that’s nothing to worry about. As stated above, dogs frequently lick one another to establish trust and pack hierarchy. Your dogs are merely expressing their instincts.

Furthermore, they won’t understand if you tell them to stop. Dogs are clever, but not that clever. If you shouted at them or punished them, they wouldn’t understand why, and would likely continue.

The only issue is that the other dog may have fleas, scabies, or another similar problem. If that’s the case, you should try to get them to stop.

Should You Stop Your Dog Licking You?

Allowing your dog to lick you, especially around the face, is a bad idea. Dog saliva contains different kinds of bacteria. Dogs groom themselves with their tongue, after all, so their mouths are dirty.

These bacteria don’t need to enter the body through scratches and cuts, although they can. They can also infect the oral cavity and nasal lining, or the conjunctiva (lining around the eyes).

According to the Canadian Veterinary Journal, the issue is worse than people realize. You may not only get a basic infection. You could experience something much worse, such as:

Each of these infections will especially affect anyone in a weakened condition. The young and old, and those who have an existing condition, are susceptible.

Considering that the origin of these infections is something so simple, you should stamp out the root cause. 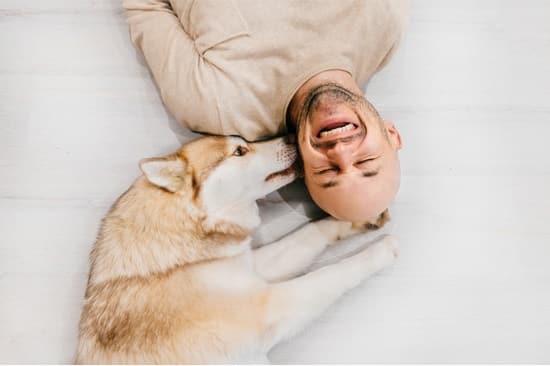 How Do I Get My Dog to Stop Licking Me?

Your dog licks you through natural instinct. If they have been doing so for a long time, you can’t get them to stop entirely. However, you can prevent licking from going on for minutes on end with basic behavior training.

1) Ignore Your Dog to Get Them to Stop Licking You

Do not reward their behavior with attention. Dogs crave your attention, and do anything to get it. When you interact with them, even to tell them to stop, they get what they want.

So, when your dog starts to lick you, tell them to stop—once. If they don’t listen, ignore their behavior. If they still won’t stop, move away from them so that they physically can’t reach you to lick you.

If you repeat this often enough, your dog will eventually learn not to lick your face. There won’t be any reason for them to because you won’t give them your attention.

One big mistake people make is to threaten their dog, or worse yet, to hit them. When you hit your dog because of bad behavior, you don’t teach them to respect you. You teach them to be afraid of you, and to dislike you. That’s not a good outcome.

The issue is that dogs have trouble understanding cause and effect. While they are cleverer than people give them credit for, dogs aren’t that smart. They don’t understand that you’ve hit them or threatened them because they licked your face.

They can’t put two and two together like that. So, there’s no point getting threatening or violent.

Dog chew deterrent is spray that tastes bitter. You spray it around the home to stop your dog from chewing up furniture, or any of your other belongings. It’s entirely non-toxic, but it tastes bad.

You can also use these sprays to stop your dog licking. If your dog won’t stop licking your hands, for instance, spray some dog chew deterrent on them. They will quickly get the hint. If they move on to licking something else, spray there too.

You could even make your own deterrent. Some people use apple cider vinegar, or even regular vinegar. However, it isn’t clear how well these work compared to sprays you can buy from a store.

4) Trick Your Dog into Not Licking You

If your dog refuses to stop licking you, you can always trick them. That doesn’t mean playing a cruel trick on them—if anything, the dog will be happier than they were.

When your dog starts licking you, give them something else to hold in their mouth. That could be a chew toy, a bone, a treat, or anything else. So long as it keeps them occupied, they won’t have time to lick you.

However, bear in mind that by doing this, you’d be rewarding ‘bad’ behavior. They may eventually understand that by licking you, they end up with a treat. This isn’t the best long-term solution.

If all else fails, talk to a dog behavior specialist. Trainers can help badly behaved dogs to behave better through a variety of tricks and treats. They are best hired for puppies, but can help older dogs too.

The first thing they can help you with is by telling you what you’re doing wrong. For example, when you react to your dog licking you, you encourage them to continue. The trainer can tell you why that is, and how you can limit your reaction.

The trainer may also spend time with the dog to make them generally better behaved. This is a significant upside. Dogs that don’t stop licking when you tell them to may be badly behaved in other ways.

The only downside is the cost. Dog behavior specialists charge a lot, by the hour. Buying a dog chew deterrent is cheap in comparison. The question is whether you think the expense is worth it to make your dog stop licking you.

Aside from that, there’s little you can do. But remember, this is a natural behavior. Dogs act on instinct.