Almost all dogs hate having their nails trimmed. It results in sheer terror and physical protests. Often, a dog’s aversion to nail trims stems from a traumatic and painful experience when they were young. It’s hugely important to ensure that there are no scary occurrences during the puppy years, as dogs are like elephants where nail trim mishaps are concerned – they never forget.

Most dogs will frantically flail around in an attempt at escaping a nail trim, and given that these claws are oversized for the occasion, many pet parents end up looking they have fought twelve rounds with Freddy Krueger before they’re done.

Sure, you could pay a groomer to do the job for you and run for your life, but maybe your dog will find the experience a little less terrifying if it’s you that does the job. This guide will talk you through how to trim a dog’s nails, no matter how much they may protest.

Do I Have to Trim My Dog’s Nails?

Well, somebody does! It is all part of being a responsible pet parent, no matter how much your dog may protest. Dogs will wear down their nails a little by walking on hard surfaces as well as running, playing and climbing, but they will never be able to keep up with the rate at which their claws grow.

On top of this, it’s no secret that dogs love to scratch. If they have excessively long nails, they could open their skin – or even damage their eyes or ears. Playtime with fellow pooches could also take a turn for the dangerous if a dog’s nails haven’t been appropriately cared for; nobody wants an innocent wrestle to end with a trip to the vet due to an inadvertent stabbing in the soft tissue.

One way or another, you will need to get your dog’s claws trimmed from time to time – at least every two months, and maybe ever four weeks. A golden rule that Preventative Vet recommends is always to get your dog’s nails trimmed before they start to touch the ground. If you can hear your pooch approaching from ten paces due to click-clacking on the ground, it’s time to get those talons trimmed.

What Are the Best Dog Nail Clippers?

If you’re looking to pick up a pair of nail clippers to trim your dog’s claws at home, here are some recommended products that can be delivered to your door from Amazon. 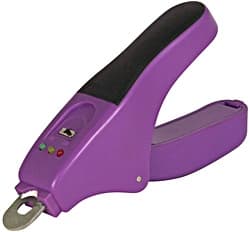 If you’re a nervous nail clipper and your dog is under 40lbs, this is the perfect product for your needs.

Think of it as a stud finder for your dog’s paws; you can hover the tool over their nails, and via the medium of lights the gadget will tell you whether its safe to clip or if you’re at risk of cutting to the quick and leaving your pooch bleeding. 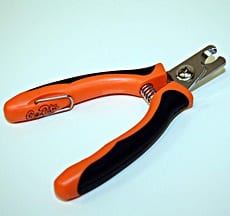 If you’re looking for something a little less space age and want the best conventional nail clipper that money can buy, you’ve found it with this GoPets design.

These clippers will cut through even the most sturdy and stubborn of nails, and they’re available in two sizes to ensure that your breed is catered for. The only thing to be aware of is that you’ll need significant hand strength to make use of them.

Check the Price of GoPets Nail Clipper on Amazon!

Another alternative is to grind your dog’s nails down using this electric device, which removes the risk of slicing through the quick and causing a bleed. It’s quiet, can be easily charged through a computer’s USB port, and comes with a variety of different heads and sizes to cover every possible need that your dog will have.

There’s nothing to gain by picking up cheap or low-quality nail clippers for home use. If you’re going to do the job yourself rather than calling in reinforcements, you should at least make sure that you have the right equipment.

My Dog is Limping Because Their Nails are Too Long

Extremely overgrown dog nails can cause severe problems for a canine, including an eventual inability to walk properly. Your dog may end up piercing their paw pads and inviting infection by allowing their claws to grow inward. Long nails also place a great deal of pressure on a dog’s ankles and could lead to a hound struggling to keep their balance. If you allow the problem to persist for long enough, your canine may even end up with a permanent irregular gait as though they have forgotten how to walk normally.

The moment that you notice your dog struggling to walk because of their nails, get them to a vet or a groomer ASAP. You really ought to deal with the problem before it reaches this stage, but if it has happened, then make sure you take the necessary action before permanent damage takes place.

How to Cut a Puppy’s Nails

It’s hugely advisable to get your dog used to the idea of having their nails trimmed while they are young. If you’re lucky, a pup will be indifferent to the process – and this may help them cope with the idea later in life!

The flipside of this is that, if you give your dog a traumatic and scary experience at this young stage of their development, they’ll likely have a phobia for life. No pressure then…

However, if you’re prepared to learn how to trim a dog’s claws without relying on assistance from a professional, follow these instructions laid out by PetMD. Remember, it’s best not to wait until your dog is old enough to understand that this might be scary; give Fido his first nail trim before he reaches six months. 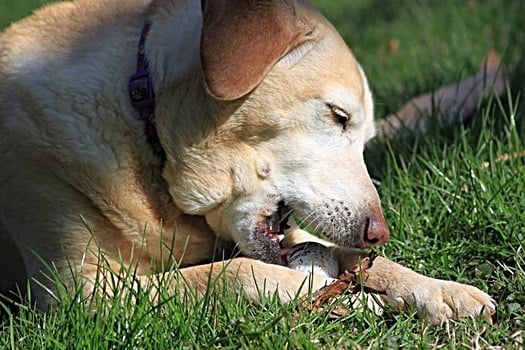 Offer constant reassurance to your puppy throughout this process, and don’t be shy about offering bribes as you work. Make a fuss, offer bags of reassurance, and find a small treat to hand over every time you manage to lop the end off a nail. The more positive associations that you can create, the more likely your dog is to let you keep on top of their nail grooming in the future.

How to Clip Nails When a Dog is Scared

As we have established, dogs loathe having their nails trimmed. It’s not because they’re being awkward for the sake of it – they find the whole idea to be extremely worrying and scary.

If you’re going to attempt to trim your dog’s claws, you’ll need to calm them down first.

Here are a few suggestions as to how this may be possible:

Dogs will be scared by the idea of having their nails trimmed; it’s just a fact of life. If you follow some of these suggestions, however, you should be able to keep the impact down to a minimum. And if you can’t, call in the professionals!

My Dog’s Nail Quick is Exposed

If you’ve cut to the quick, that’s a bad thing in this instance – your dog is going to be bleeding, and you’ll need to take action. The good news is that you haven’t placed their lives in any danger, no matter how much they may make you believe that by howling the house down. Just make sure that you have stocked up on either styptic powder or a styptic pencil before you begin.

In the event of a nail’s quick being exposed, very quickly apply the powder (on a moistened cotton pad) or the pencil, and hold it in place for around 30 seconds. The powder will act as an aesthetic to ease your dog’s pain, in addition to stemming the bleeding; if you use the pencil, prepare for more flinching as it will likely sting a little at first. If you pull away the pad or pencil and the bleeding starts again, repeat the process for another 30 seconds.

If you’re determined to use a homemade remedy, you could always fall back on flour or baking soda that you can dip your dog’s palm into. This will only stop the nail from bleeding, however, and offer no pain relief to Fido.

Once you have finished, try to keep your dog off their feet for a while; carry them over to their bed or the sofa, and give them a treat and favored toy to take their mind off their ordeal. They’ll bounce back in no time, so there’s no need to worry about permanent damage – though it may be a very long time before they trust you to trim their nails again. 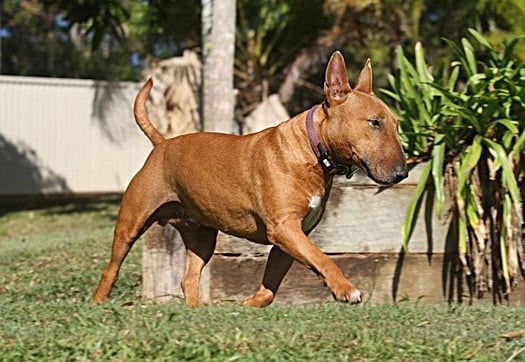 How to Cut Dog’s Nails That are Black

Black nails are trickier to trim than their transparent counterparts. After all, you can’t see the quick in these instances – how will you know that you’re not going to leave them in huge pain?

The website Devoted Dog World has a pictorial guide as to how you can know that you have trimmed a black dog nail sufficiently; it’s about continuing to trim until you reach what is known as the pulp.

In short, when you trim the very tip of a black dog nail, you’ll notice that the claw is almost entirely white inside. Trim a little further; you’ll find some darkness in the middle. Clip one last time, and you’ll notice that the nail is almost entirely black again. This is known as the pulp and the limit of how far you can cut without risking a bleed.

If you’re nervous about clipping the claws of a dog with black nails but are still determined to complete the groom at home, you could pick up a nail file and wear them down this way instead. You’ll need a very patient and understanding dog to pull this off, though!

Can I Put a Dog to Sleep to Cut Their Nails?

You can, but as the old saying goes, just because you can it doesn’t mean that you should. Placing a dog under medical sedation always comes with risks, and if it isn’t 100% necessary you really shouldn’t take the chance.

If your dog will not allow you to trim their nails and you need to use a sedation technique.

Remember, though, that you shouldn’t engage in physicality with your dog unless you share complete trust and you understand his or her physical limits – and body language for, “enough.” You don’t want to make a scary experience even more frightening, as it could permanently damage your relationship.

Just allow us to reiterate one more time – if you’re not comfortable with physically restraining and sedating a dog, don’t take any chances! Vets and dog groomers will always help with the trimming of a dog’s nails, and the few bucks you’ll save by doing it at home is not worth traumatizing your poor pooch.

If you have a dog that is indifferent to having their nails trimmed then you can count yourself lucky – this can be a hugely frustrating and traumatic experience for most people! Keep an eye on your dog’s nails and make sure that they never grow too long for comfort. While no dog will actively ask to have their claws trimmed, it’s essential that it be done with regularity – for your dog’s sake, and that of everybody and everything around them.