If you’ve ever seen people walking barefoot around a city and wondered if there was a special term for this particular lifestyle choice, then wonder no more, since this is known as being really darn gross.

There’s not only the unthinkably dirty stuff that they must step on when walking around an urban environment but also, what the heck do they do when it gets cold?

And yet, there’s a member of your family who walks around like this each and every day, and that’s your dog.

If you’re worried that you might be neglecting your poor pooch’s paws during cold weather, it’s time to start making sure that their adorable little feet stay warm and safe, whatever the conditions outside. 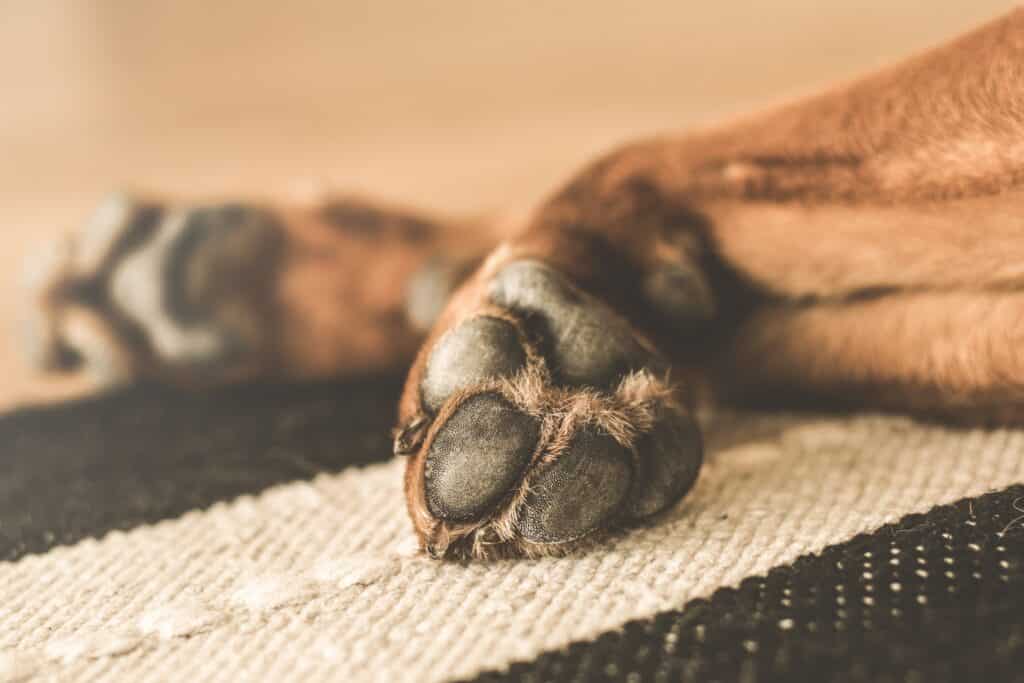 Just How Well Can a Dog’s Paws Handle the Cold?

There are many different things that can determine how well your dog’s paws can handle cold weather, such as the age of your dog (puppies and senior dogs might be more affected than a healthy adult dog), and just how cold it is.

Just remember that some form of care will be required when the temperature drops, and it might be as simple as applying moisturizer to soothe cold paws.

And when there’s nothing but snow and ice outside, a decent pair of dog boots will be the best way to go.

Can Dogs’ Paws Get Too Cold?

It’s no mystery that the skin on the soles of your feet is thicker than the skin on other parts of your body, but it might be a mystery just why.

Basically, it has been found that basal cells (which are found in the deepest part of your skin) divide with greater frequency on the soles of your feet, which creates more mass (and thicker skin) because this is where you need the most protection. Ah, science. 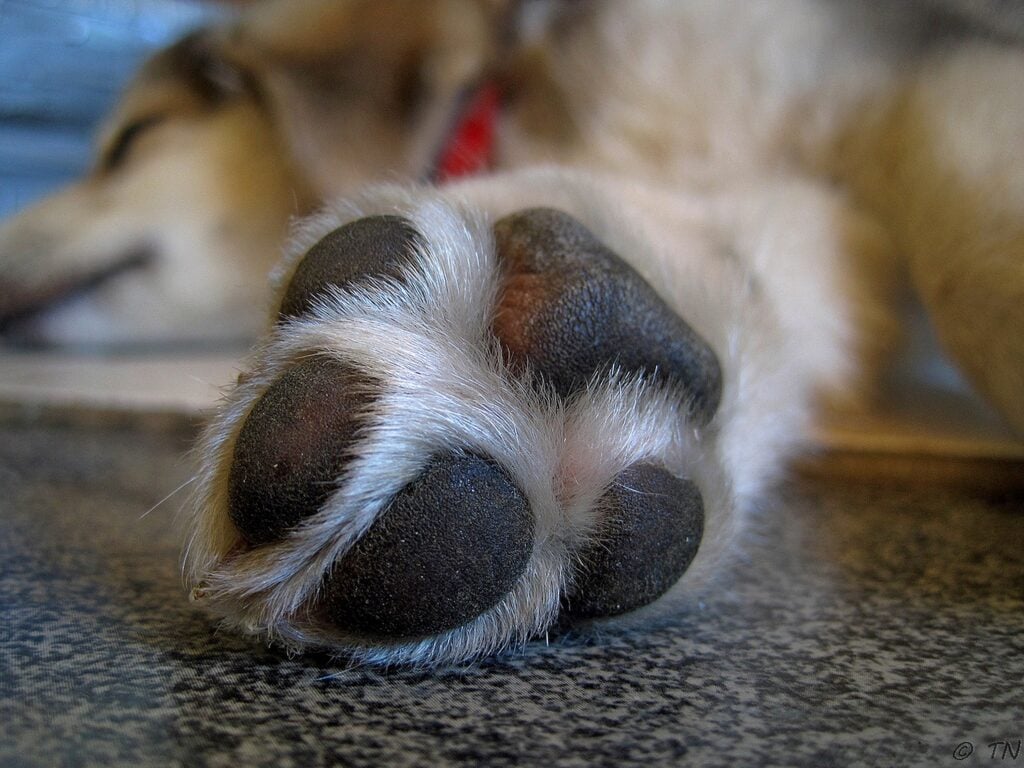 It’s the same with your dog, although the base of their paws has pads and grooves, as opposed to a single flat surface like your own feet.

So while thicker skin results in greater protection against damage (including temperature extremes), a dog’s paws can certainly get too cold if they’re exposed to low temperatures for too long.

Some dogs are obviously better suited to cold climates, and an Alaskan Husky or Malamute will enjoy snowy conditions more than a Mexican Hairless Dog (also known by its truly awesome official name, the Xoloitzcuintli).

Basically, any dog with soft, thin fur will have less protection against the cold than a dog with a thick and bushy coat.

How Long Can a Dog’s Paws Be in the Snow? 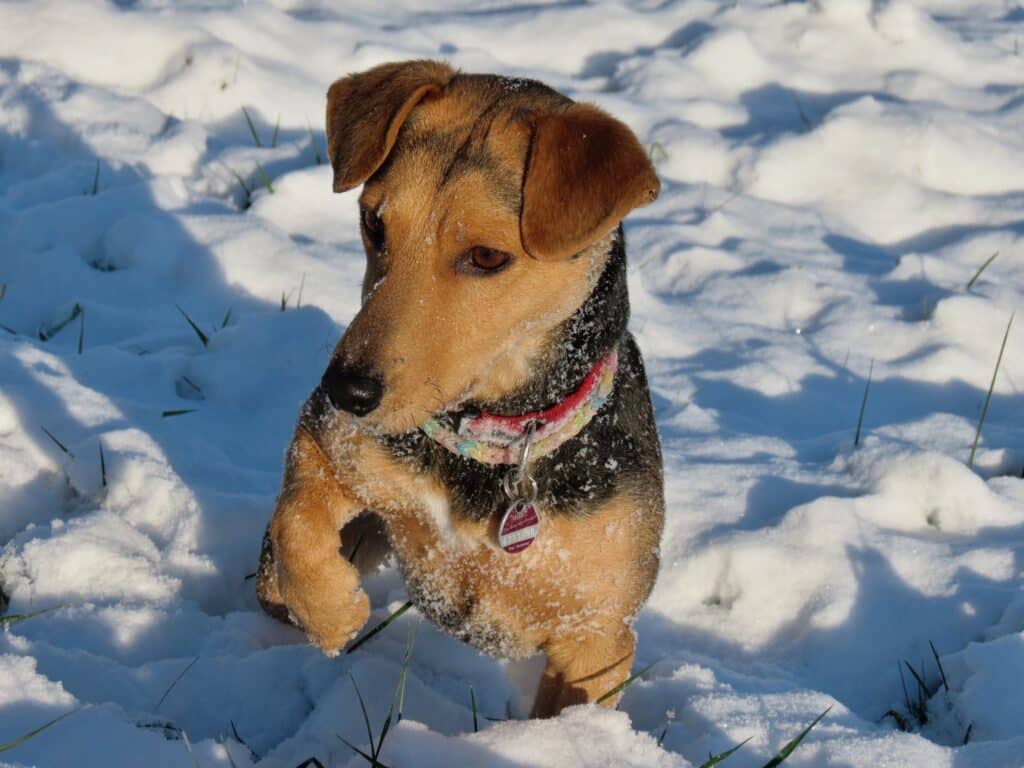 It might seem curious how dogs can stand in the snow and ice without seeming to be uncomfortable. It was such a curiosity that scientists at Tokyo’s Yamazaki Gakuen University decided to find out how it was possible.

The Mystery of the Pads

Although the pads in your dog’s paws contain a reasonable amount of fat, which offers protection from external temperatures, it’s not as though it offers that much protection.

It was found that the pads in a dog’s paws have a complicated network of veins which keeps moving warmer blood to your dog’s paws, essentially regulating the temperature.

Still, it’s not as though this means that your dog can stay outside in the cold indefinitely.

It’s unwise to let your dog play in the snow without your supervision since if they have an adverse reaction to the cold, it can come rather quickly.

Sure, the breed, age, and general health of your pup can all play a role in just how long they should be playing in the snow, but 30 minutes is a good rule of thumb.

This is a general rule that applies to all parts of your dog’s body, including their paws. After around 30 minutes, they’re risking serious damage to their poor little paws, unless they have a solid barrier against the elements.

What Can I Put on My Dog’s Paws in the Winter? 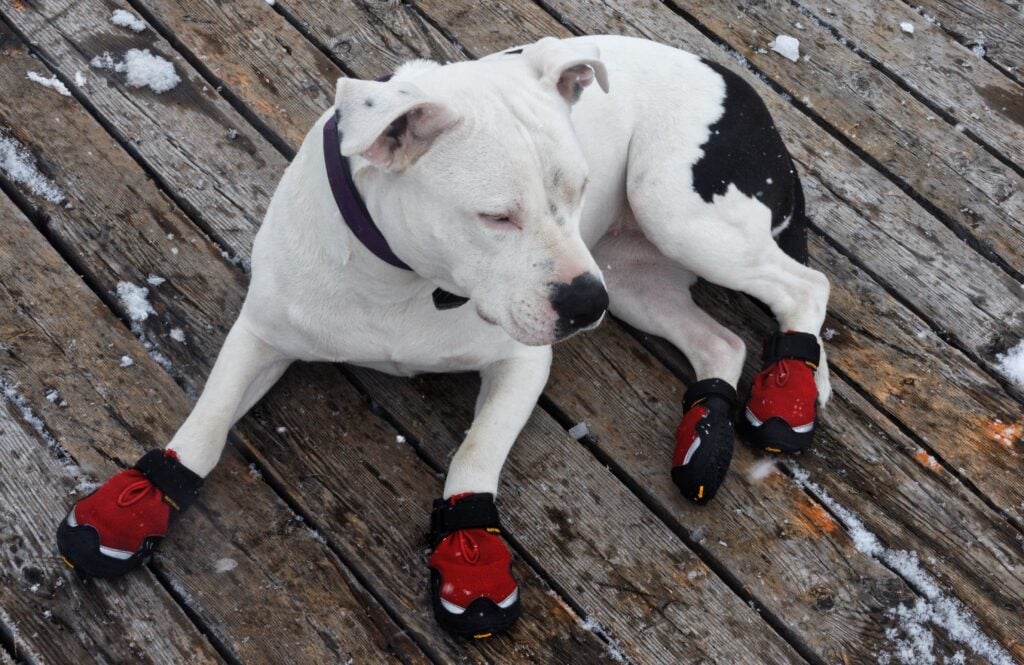 So how exactly can you give your dog’s paws a solid barrier that will protect them from snow, ice, or ground that is close to freezing? I’m glad you asked.

Let’s say you had a permanent fur coat that extended all the way to your feet and even covered certain parts of the soles of your feet. You probably still wouldn’t want to go outside in the snow without anything on your feet, would you?

Your dog’s paws can handle the cold for a short period of time (remember that 30-minute rule), but if you want to take them outside for longer, or if the temperature and conditions are especially brutal, your dog will love a pair of snow boots… once they get used to them.

There are a few fairly simple guidelines to follow when choosing a pair of snow boots for your dog.

Guidelines For Buying Snow Boots for Your Dog

Be sure to allow your dog to walk around the house a few times as they wear their new boots, and be sure that you’re there to watch.

Okay, it is pretty cute to see, but since a dog uses the pads of their feet to balance themselves, there’s a small chance that they could fall over, and you’ll definitely want to be there to reassure them.

They will get used to the strange sensation of covered paws, but they’ll definitely need a few trial indoor walks before they can hit the snow.

Can Snow Hurt a Dog’s Paws?

You’ve probably heard of something being as pure as the driven snow. But snow isn’t exactly all that pure, is it? You can see this when it melts and all the things the snow was hiding are revealed.

Underneath that dusty white surface coating, there is a lot under that snow that can hurt your dog’s paws. Consider the gravel and salt that is often distributed on pavements and roads in snowy weather.

There’s also the matter of any de-icing chemicals that your dog might have walked through, and these can be dangerously toxic (especially since your dog will try to lick their own paws clean once they get back to the warmth of home).

The Danger is Still There, Only Covered

They’re only covered. Snow boots for your dog will protect their paws against these objects, but what about if your dog wasn’t wearing boots?

When you get home from a walk on a snowy day, be sure to wipe their paws thoroughly, using a washcloth that has been dampened with warm water. This removes any toxic substances and allows you to inspect their paws for damage.

Exposure to the cold can actually cause the pads on your dog’s paws to dry out and even crack. This is easily overcome with an appropriate balm or moisturizer.

Don’t use your own balm or moisturizer, since just because something is safe for you, it doesn’t mean it’s the same for your dog.

Vaseline (or another unscented petroleum jelly) will be okay, but you can also find a specialist product made just for your dog at your local pet store, or you can ask your vet.

Be sure to keep an eye on your dog after applying any balm or moisturizer, since they’ll probably try to lick it straight off.

You can also get into the habit of applying a small amount of balm or moisturizer to the pads on your dog’s paws before going outside during cold weather.

It won’t keep their paws any warmer as such, but it can create a protective barrier against salt and any deicing chemicals (even though your dog’s paws will still need to be wiped clean afterward).

Should You Take Your Dog Out in The Snow? 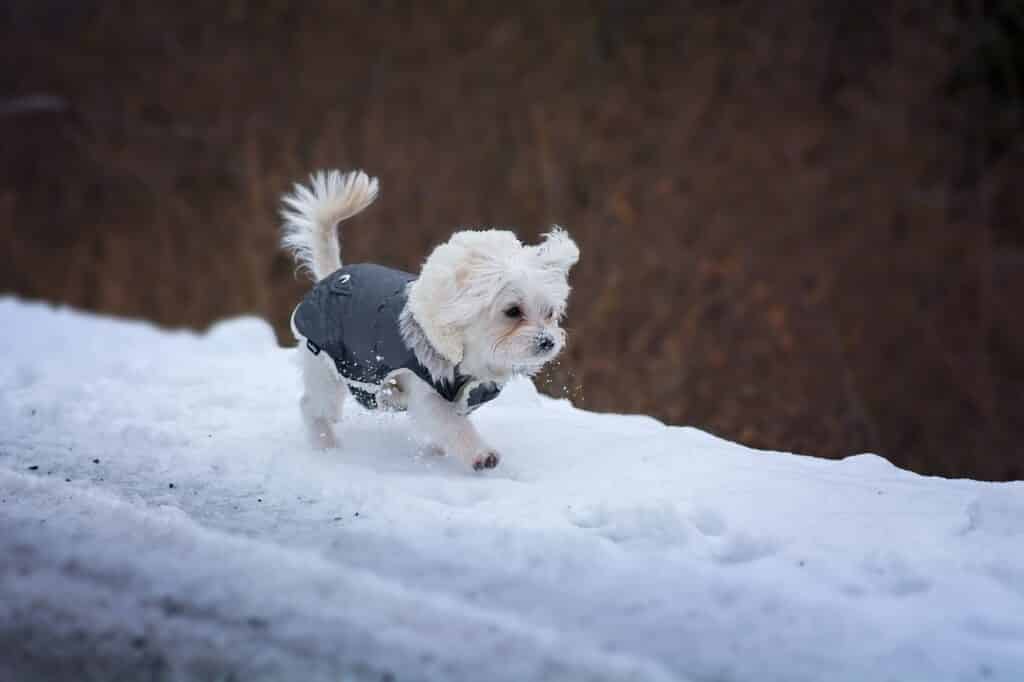 In short, a bit of playtime in the snow without any prior form of protection will be fine for your dog, but only in moderation (and that moderation runs out after about 30 minutes).

Even then, be sure to wipe and inspect your dog’s paws and apply an appropriate balm or moisturizer for some after-snow care.

If you happen to live in an area where the winters are particularly harsh, and you still want to take your dog outside, then a good pair of snow boots is not only a good idea but a necessary one.